Doctor's Advice: I think my wife is cheating on me 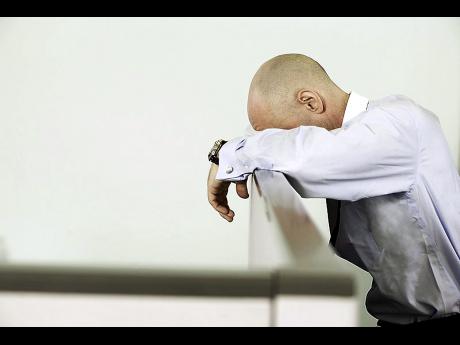 Graphics
All day at yoru desk is an easy way to a hospital bed.

Q. Hi Doc, I am a little concerned about my wife. I suspect she is cheating on me.

We have been married for 12 years, and for quite a while, everything was OK. Sex with her was good. She was a very passionate woman, and loved to orgasm. I was unfaithful once, but she does not know about that.

However, around 18 months ago, things began to change. She started to spend more and more time with a women's group that she belongs to. Also, she seemed to have lost interest in having sex with me.

Again and again, I would say something to her like: "We'll have sex tonight." And she would kind of snort and say, "We'll see about that!"

Also, when I am having sex with her, she just lies there rigid, holding her arms and legs very stiff, and staring at the ceiling. She makes no attempt to cooperate or get excited. And when I have finished, she just rolls over, without talking and goes to sleep. Doc, I have not seen her orgasm in a long, long time.

I cannot understand why she is behaving this way. She now seems to want to spend very little time in my company. She prefers being with her two best friends, or out doing something with her club.

I can't see what I have done wrong. Do you think she has found another guy, and is having sex with HIM, instead of me?

A. To be frank, this marriage sounds like a terrible mess. It is possible that it could be saved, if both of you went to see a relationship counsellor and had some sessions with him or her. The two of you would have to work very hard to try and mend the rifts that have appeared between you two.

Now you ask me whether your wife has been cheating on you. I notice that you have cheated on her, and you do not seem to be at all concerned about that, or appear guilty. I just wonder whether she found out about what you did, and has been mad at you ever since.

Now, you have not provided any evidence at all that your spouse is cheating. But in view of her extraordinary behaviour, there has to be at least a possibility that she is finding sexual satisfaction elsewhere. It does occur to me that as she spends a lot of time with women, it is conceivable that she is having sexual relations with a woman, rather than with a man. But we have no proof of that.

It could be that (as happens in some marriages) she just does not like you any more, and prefers to spend most of her time elsewhere. That would indeed be sad.

I presume that you want to keep this relationship going, so your best course would be to try to persuade her to come with you to see a marriage counsellor, or perhaps a minister of religion, in order to talk things over. If she will not agree to that, then I fear that your marriage may be over.

One last word about sexual relations: please do not try and coerce her into sex. At the moment, she clearly does not want to have intercourse with you, and I fear that you just have to accept that.

Advice on taking the Pill

Q. Dear Doc, I am female, and at the late age of 29, I have just discovered the joys of sex! So I feel I must go on the Pill.

I do understand that I would have to take it three weeks out of every four. But what concerns me is this: what about the other week?

If I am not taking the Pill for seven days, surely I could get pregnant during that time, couldn't I?

A. No, that will not happen. As you say, in the case of most brands of Pill, the woman takes a tablet each day for three weeks. Then she has a week off. After that, she starts the next pack of 21 Pills.

But provided you take each packet precisely as prescribed (one Pill per day for 21 days), you will not get pregnant during the seven-day break.

What should happen during the seven-day break is that you will have a period. It is stopping the Pill at the end of the pack that brings on the menses. Incidentally, this 'bleed' should be short, light, and virtually pain-free. That is a big advantage of taking the Pill.

Q. I am a married man, and my wife has never been very interested in sex.

As a result, we only 'do it' around once per month.

This habit does at least keep me from getting too frustrated. But will it harm my health?

A. It seems to me that this type of behaviour by husbands have become more common since the arrival of the Internet. It is now very easy to access pornography, and statistics indicate that millions of people are watching it.

What you are doing will not harm your health. However, it would be nice if you could establish a better sexual relationship with your wife. Have you considered sitting down and talking to her about your sexual feelings and needs?

Swelling in the testicle

Q. Help me, Doc! I am a 24 years old and last week while in bed with a woman, she pointed out that I have a swelling or lump in my left testicle.

A. Let us hope not. But you must let a doctor examine your testicle as soon as possible. After examining you, he will probably want you to do a special sort of scan, called an 'ultrasound.'

The scan is quite painless, and it gives a very good picture of what is going on inside the testicle. It can tell the medics whether the lump is benign or cancerous.

So please, do not delay. Try and see a doc tomorrow.

No sexual feelings in the breast

Q. I have suddenly lost all sexual feeling in my breasts. I used to love it when men played with my nipples, but now there is no exciting sensations at all.

Could this be at all connected with the fact that my daughter passed away earlier this year?

A. Absolutely. When a woman loses a child, it does sometimes happen that the sexual feelings in her breasts suddenly disappear. I have seen the same thing occur after a miscarriage.

I am sorry about the trauma you have been through. There is no medication which will make your breasts normal again, but the sensation will almost certainly return one day.

Meantime, are you depressed? If so, please consult a doctor.