Norman Peart | My Journey With Usain 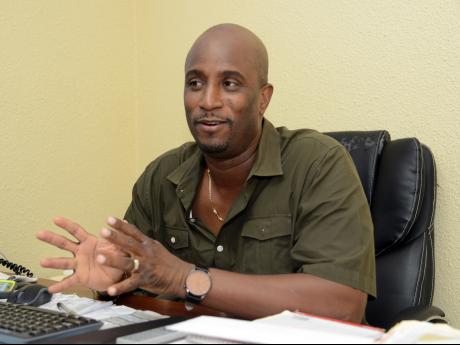 Gladstone Taylor
Norman Peart speaks to Outlook of his encounter with a young Usain Bolt. 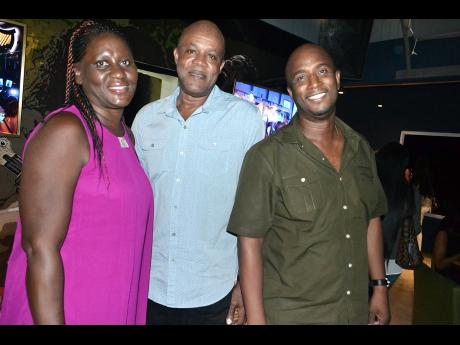 Carl Gilchrist
From left: Jennifer and Wellesley Bolt with Norman Peart at the recent opening of Tracks and Records in Ocho Rios, St Ann. 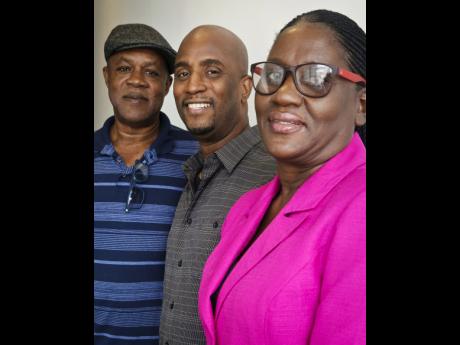 They are both from Trelawny. Norman Peart is from Schawfield, and Usain Bolt is from five miles away in Sherwood Content, and both attended William Knibb High School in the parish.

Peart did not take his athletic interest beyond high school, but their paths eventually crossed years later after he graduated from the University of Technology (UTech).

With Bolt giving clear indication that he will end his career next year, Peart, who is business manager for Usain Bolt Management Limited, was asked by Outlook to share the story of their journey together.

"I was working at the tax office in Montego Bay when our high school principal called me asking if I would come and help with the sports programme. I said no because of my schedule, but she called again with more details," Peart recalled in an exclusive interview with Outlook.

"We have this little one and we think he can get a scholarship," the principal said, so Peart went for the meeting and, for the first time, laid eyes on someone he fondly recalls as a, "long-foot boy". "I was amazed at his height for a 15-year-old, but I was told he is a good boy," Peart who is now Bolt's business manager said.

After meeting Bolt, Peart requested a meeting with his parents to see what the family dynamics were.

He found the elder Bolts to be solid, God-fearing folks who were also looking for someone to help their son with lessons and training. The next 18 months saw a rigid regimen of studying and training, and that led to his big win at the World Juniors in 2002.

"I was very pleased that in getting to know Wellesley, he was firmly in charge of his household and commanded the respect of his son. I quickly became part of a team comprising principal, parents, and three members of staff who taught and mentored the budding Olympian so that the right decisions would be made regarding his future," Peart said.

Bolt concurs as he told Outlook, "Mr Peart has been with me since 2002, and he is now considered family. My parents and he worked as a great team in my early years as a professional athlete. And that I consider very important to my success. Yes, they teamed up on me during my teenage years and terrorised me," the Olympian said chuckling.

Bolt broke records at champs in 2003, particularly the 200 metres, making him, at that time, the third-fastest in the world. The team began to think seriously about his future and were advised to speak with the IAAF High Performance Training Centre for which the late Teddy McCook was director and Fitz Coleman was head coach.

Coleman and McCook subsequently journeyed to Trelawny to meet Bolt's parents and Peart to talk about his future. Peart meanwhile, had held discussions with the Bolts who were concerned about him being on his own in Kingston.

"They wanted my assurance that I would go with him, and I was immediately thrust into the role of father. We got help from sponsors like Carl Chang of Western Sports and the Super Plus chain which had begun with us in 2002."

For Wellesley and Jennifer, having sat with Peart from the start, they felt assured that their son was in good hands.

"When we met Norman, we felt him out. We knew he was the right person for Usain. Although he was young, we saw that he had Usain's interest at heart, leaving MoBay after work and travelling to Trelawny to spend hours with Usain working with him," Wellesley Bolt said.

Jennifer Bolt concurs. "I knew I was putting my son in good hands. A smiling but proud dad quips, "An him mean, you see!" he winks and adds, "So we know Usain's finances is in good hands."

Meanwhile, Peart obtained a transfer from the Montego Bay tax office to Constant Spring in St Andrew, and soon met with Puma to secure his charge's first contract. "Bolt was too young, so his dad had to sign on his behalf," he recalled.

"Puma was the only choice. I thoroughly researched them, looked at past and present athletes they were endorsing, as well as their financial standing, to make sure they would do right by Bolt," said Peart, who holds a degree in business administration, majoring in finance.

Supremely qualified for the crucial role he plays, Peart is armed with eight years' experience in tax administration as an auditor. He is also a licensed Jamaica securities dealer, and since 2012, he is an authorised IAAF athlete representative and currently represents other Jamaican athletes.

In 2009, he decided to work full time with Usain Bolt Management Limited (UBML).

Things moved rapidly and very soon Peart saw the need for a competition agent. In summer 2003, he opened discussions with Kim Sports Management (now PACE Sports Management) and concluded the agreement in early 2004. They are still the multi-gold medallist's agents.

Peart said the alliance with Puma has been good. He made sure to check their relationship with other top athletes over the years and has maintained a steady eye on all his charge's deals with overseas agents.

Still, Peart and the Bolts have come a long way from the days when, due to his rigid training schedule, private tutors were engaged to give the track star lessons at home. He subsequently got the required five CXC subjects for entry to UTech, but left to focus on his athletic career after one semester.

"We also got another student to come live with us for two years, to provide someone his own age for Bolt's company. The typical teenage boy, Bolt did not give his guardian any cause for serious concern nor did he rebel against the rules he'd left home with," Peart said.

"His parents visited frequently, but he always had to go home for Christmas. He couldn't stay out late or go to clubs before age 18. He could have broken out, but with the strength of his parents, he towed the line. He might have sipped occasionally, but we never had any confrontations," Peart said.

Described by his mentor as, "A nice, kind-hearted person who loves to help people," Peart said Bolt is always in his parents' heart.

Bolt looks back with gratitude saying, "The teamwork and understanding between them shaped my life. Being the meanest person I know (chuckle), I know my finances are in good hands. What I admire about him is that he will tell me as it is and he pays strict attention to me being financially secure after I hang up my spikes."

This is evidenced by the fact that the track star first became a homeowner in 2008 and with Peart's guidance, his real-estate and other business portfolios have been growing ever since.

Has he ever felt frustrated by the enormity of his responsibilities? Peart, who is married with two children, said on the rare occasion when that happens, he simply remembers how much the elder Bolts are depending on him to keep his eyes and ears on their son's interests. "It would be like abandoning my child ... you don't do that."