Come Dance With Me for SVL Cash Pot Trophy 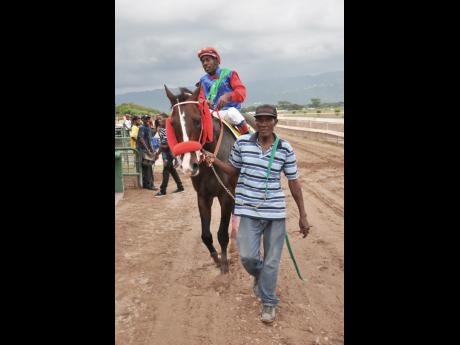 Jermaine Barnaby/Photographer Jockey Paul 'Country' Francis, aboard UPPA TUNE, is led to the winners' enclosure after winning the feature event for the None Such Trophy Sprint Trophy 3-Y-O & Up Graded Stakes by over 1200 metres, at Caymanas Park on Saturday. UPPA TUNE won by three lengths ahead of the Omar Walker-ridden POTCHEEN.

The rich and prestigious Supreme Ventures Limited (SVL) Two-Year-Old Series - comprising three races - commences at Caymanas today with the 10th running of the Cash Pot Only One For Me Trophy over 1200 metres for a purse of $2.95 million.

The series will continue on November 29 with the Pick-3 Super Challenge Trophy over 1400m for a purse of $3.6 million and concludes on December 26, Boxing Day, with the SVL Jamaica 2-Y-O Stakes over a mile for a whopping purse of $4.25 million.

Supreme Ventures Limited will again offer a million-dollar bonus to the owner of the horse good enough to win all three races in the series, a feat achieved for the first time by the brilliant filly, PRINCESS POPSTAR, last year. However, the Adore the Gold-Docs' Paladin offspring from the stables of 14-time champion trainer Philip Feanny was not eligible to collect the bonus, as she failed to meet the main criteria: she wasn't purchased in the 2012 TOBA Yearling Sale.

Today's big holiday feature has attracted eight starters, including four from the stables of champion trainer Wayne DaCosta, who has won this race four times since its inception in 2005.

Of the quartet, three have won in impressive fashion - CHALICE PIPE, DINNER BY SEVEN and ALI BABA, the mount of stable jockey Dick Cardenas.

All are well and truly prepared for the encounter, but despite this, face a talented filly in Dwight Chen's COME DANCE WITH ME, who made all impressively for a fast-time win (1:06.2) over 1100 metres on her August 31 debut in the Rhoel Rhoden Memorial Trophy, with former champion Percy Williams aboard.

Leading in fast splits, the speedy daughter of Blue Pepsi Lodge-Soca Dancer slammed the then favourite, ALI BABA, by 7 1/2 lengths, and the latter subsequently paid tribute to the form with a runaway victory over this trip on September 20, clocking a fast 1:13.3 in beating subsequent winner SHINING LIGHT (who renews rivalry) by six lengths.

Having worked exceptionally well (bullet work after bullet work) in preparation for this trophy and Lasix administered for the first time, COME DANCE WITH ME ought to be followed despite the good claims of ALI BABA (looked improved) and the chestnut colt CHALICE PIPE, who breezed home by 12 lengths on his debut over the round-five course and has pleased in his preparation.

The Supreme Ventures Cash Pot race day programme kicks off with a high-claiming event over the straight in which the down-in-class pair of SIR VON and SUNLIGHT EXPRESS, both winners over the course in recent months, should have the finish to themselves in a seven-horse field.

Both have good speed, but preference is for the DaCosta-trained American horse, SIR VON, who beat a good field of overnight allowance horses over the course on September 10 with leading jockey Dick Cardenas aboard. Cardenas again has the ride aboard the seven-year-old horse, who has won a number of races over the straight.

I also like CHEERS, under champion jockey Dane Nelson, in the Cash Pot

Super Dash Trophy over the round-five course, SHELLIAN GREY in the fourth, PIZARRO to give Nelson a second winner in the sixth, BRILLIANT ACE in the

seventh, and MR. LUVAL with Cardenas aboard in the 10th and final race.