Bolt says as long as he's fit it's ‘Impossible’ to lose 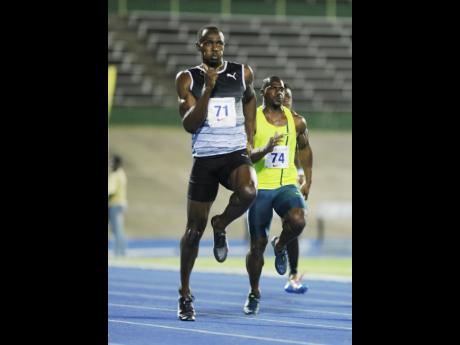 Ricardo Makyn
Usain Bolt (left) runs ahead of ahead of Nesta Carter (right) to win the men's 200 metres at the UTech Classics at the National Stadium on Saturday. Bolt won in a meet record 20.20 seconds.

The world's fastest man, Usain Bolt, is in a bullish mood ahead of what is shaping up to be a rather exciting season.

The towering Jamaican ran his first 200 metres in almost two years at last weekend's UTech Classic and left the track with a word of warning for those eyeing his scalp.

"It's impossible to beat me once I'm fit," Bolt said after a workman-like 20.20 effort.

The six-time Olympic gold medallist and double world-record holder welcomed a clash with last season's flag-bearer, Justin Gatlin, but seemed unconvinced that the American posed any real threat to his dominance.

Gatlin, who was responsible for six of the seven fastest times recorded over 100m last year, including the world-leading 9.77, has been vocal about his belief that he will be the man to beat at this year's World Championships in Beijing.

Only once has Gatlin beaten Bolt over 100m in their seven meetings - back in 2013 at the Rome Diamond League.

NO CHANCE FOR GATLIN

Now, as far as the Jamaican is concerned, the American sprinter will have no chance against him once he is in good shape.

"It's a fact. What makes me confident is the fact that when I'm in great shape I have no worries. I am getting in better shape after every race I run and after every day at training," said Bolt.

"My coach is happy about my progress and it's just all about running now, getting the races in and taking it from there. As long as I'm fit and ready to go, it's impossible [that I will be beaten]," said Bolt.

"I never have a problem competing, as long as I know I am in great shape and I am getting there. It's good to compete against the top people to see exactly where you are and what you need to work on.

"I never back down from a challenge. Once I'm not injured, I'm ready to go, so we will see what happens. I'm just trying to get into race sharpness and get it going," added Bolt.

The 28-year-old, echoing the sentiments of his coach, Glen Mills, added that his focus is to end his career on top and protect the legacy that he has created.

"I talk to the coach over the years; we talk about motivation and what I need to focus on and what motivates me, and he said one of the things that I should use is to remember that people don't remember what you do in the past, it's all about the present, so I need to focus on defending my legacy and ensure that's intact when I'm finished running," said Bolt, who announced that he would retire from the sport after the 2017 World Championships.

"He (Mills) always says I should make sure if I'm not going to put my all in it I shouldn't do it. He said from the start that if I'm not in good shape, he would not go to Beijing with me, so I have to make sure I'm in great shape," laughed Bolt.

Assessing his first 200m since the 2013 World Championships, Bolt said it was far from perfect.

"It was an okay run, but as you know, I hadn't run in a while, so it wasn't as smooth as I wanted. But I'm happy to get it over with and to come out injury free, so I'm happy about that," said Bolt.

"I need races to get to that sharpness, so we are trying to get as many races in as possible to keep sharp. We have a few races coming up and that's the focus, to get as much races as I can before New York."

Bolt is scheduled to appear this week at a promotional race in the host city for the next Olympic Games, Rio de Janeiro, Brazil, and has been confirmed for Diamond League races in New York (June 13), Paris (July 4) and Lausanne (July 9). He will also feature at the May 2-3 IAAF World Relays in The Bahamas.