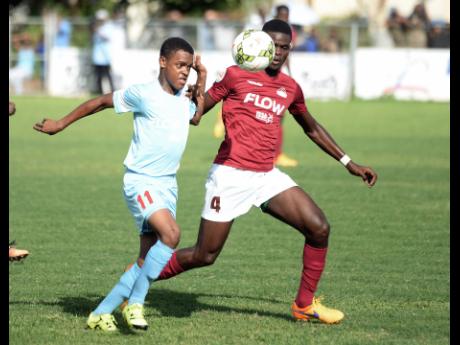 Former national under-17 captain, Alex Marshall, seemed in a league of his own, bobbing and weaving his way to four superb goals, leading many time winners St George's College (STGC) to a 6-0 win over Eltham in their Inter-Secondary School Sports Association (ISSA)/Flow Manning Cup competition at Winchester Park yesterday.

"I feel elated with my four goals because I listened to the coach's instructions, and he said that we need to start kick from the 18 yard box, and inside the 18, so I went out there and executed," Marshall told The Gleaner.

"I thank God for my performance. My mother said I must start scoring goals now, and stop passing the ball when I can kick," he underlined.

Interestingly, Marshall said he is most looking forward to facing Wolmer's Boys in the competition this season.

"From I was a little boy, coming up from Pepsi (Colt under-16), they always knock me out of competitions, so I want to repay the favour this time," he stressed.

The George's machine was no doubt up and running yesterday, as they bounced back from a shock 2-1 defeat to Innswood, earlier this week.

Aside from a few chances which went wide of goal, or those which became regulation catches for goalkeeper Cyle Elliot, there was nothing in the game for Eltham.

"Usually we don't do as well in the first half, and today we were four nothing up at half-time. We came out much more relaxed in the second half, so it was a good performance, and we give thanks," said STGC coach, Neville Bell.

"We (St George's College) still have some work to do, and we will continue working hard," he stressed.

"So far, we have had a very poor season due mainly to indiscipline. The guys are not following instructions. They go out there and do what they think they should do and not what we as the coaching staff want them to do, and it is costing us dearly," he bemoaned.