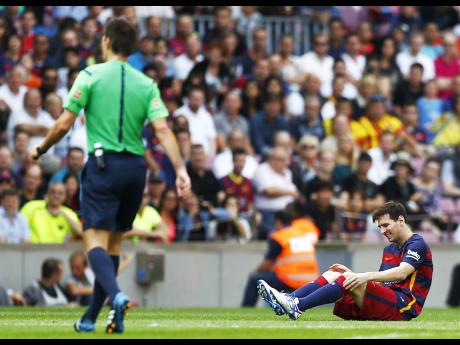 AP
Barcelona's Lionel Messi reacts after getting injured during a Spanish La Liga match against Las Palmas at the Camp Nou stadium in Barcelona yesterday.

Lionel Messi tore a ligament in his left knee near the start of Barcelona's costly 2-1 win over Las Palmas on Saturday that provisionally lifted the defending champions to the top of the Spanish league.

The club's all-time leading scorer asked to be substituted in the eighth minute after he had tried to return to the match following a collision with a Las Palmas defender.

Medical tests at a local hospital found that he had torn a ligament, and the club said Messi will be sidelined for seven to eight weeks.

"This is a test and an extra motivation for this team," Barcelona coach Luis Enrique said. "We have to accept the challenge and improve our performances because we are capable of it."

Luis Su·rez responded immediately to his coach's call by scoring twice to help the hosts bounce back from their stinging 4-1 loss at Celta Vigo on Wednesday.

In the capital, Malaga goalkeeper Carlos Kameni made a series of impressive saves as his side held Real Madrid to a goalless draw, but none was better than the one hand he managed to get in the patch of Cristiano Ronaldo's blistering shot in the 48th.

Villarreal moved past both powerhouses into first place and one point ahead of Barcelona and two ahead of Madrid after they edged Atletico Madrid 1-0 at their El Madrigal's stadium.

Celta missed their opportunity to rise to the top of the standings after it drew 1-1 at Eibar. Iago Aspas cancelled out Borja Baston's early goal in the 76th, but his Celta settled for a point that kept it level with Madrid in fourth place.

Also, Sevilla substitute Yevhen Konoplyanka netted a free kick with four minutes to go to snatch a 3-2 win over visiting Rayo Vallecano that pulled the Andalusian side out of last place with their first victory of the season. Rayo had erased a two-goal deficit before Antonio Amaya was sent off with a second booking for the foul that set up Konoplyanka's goal.