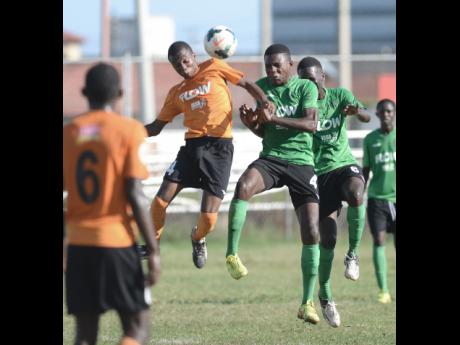 Familiar with what it takes to reach the second round of the ISSA/FLOW Manning Cup football competition, 2005 champions Calabar High saw off the physical and tactical challenges of lowly Tivoli with a 3-1win at the Edward Seaga Sports Complex yesterday.

Mickel Graham sent them ahead four minutes into the match with a powerful close-range finish, while Lenworth Reckford finished off what could go down as the goal of the match via a 19-yard free-kick, which sizzled and sailed into the back of the net in stoppage time of the first half (45 plus one minute).

The half-time score was 2-1 in favour of Calabar, which scored their third goal inside 58 minutes, as Roman Rallyns capitalised on a bad giveaway by goalkeeper Romane McKenzie.

Tivoli's consolation was scored through a 42nd-minute penalty, after Renardo Burgher was adjudged to slap Rajeem Lothian inside the penalty box. Dwayne Coke subsequently fired in low and hard.

The result means that Calabar pulled into second position in Group A on 10 points, the same as defending champions Jamaica College, who have a superior goal

It took the Red Hills Road-based school six games to qualify for the second round, while Jamaica College have played four, with three wins and one draw.

Yesterday's game was a tense battle which saw both teams concede possession and give up numerous fouls, eight yellow cards in total and a red card to goalscorer Dwayne Coke for a rash tackle late in the game.

Of Calabar's three wins, two losses and one draw, coach Bradley Stewart said he is "not necessarily satisfied".

"(We've) what we think is probably enough to take us to the next round, and we hope that by virtue of having this little rest period, we will get back to a better situation," he added.

Stewart added that the break will give them a chance to recuperate and get the players back to their best.

Meanwhile, Tivoli's coach said his young team, though eliminated, will be "rebuilding for next season".