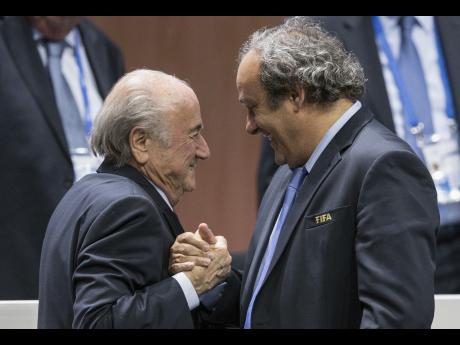 AP photo
In this May file photo, FIFA president Sepp Blatter (left) after his election as President is greeted by UEFA President Michel Platini at the Hallenstadion in Zurich, Switzerland.

The FIFA ethics committee has been examining the cases of President Sepp Blatter and UEFA President Michel Platini, a move that could lead to the suspension of world soccer's most powerful officials.

Abdoulaye Makhtar Diop, a Senegalese member of the executive committee's adjudicatory chamber, said in statement today that the Blatter and Platini cases were being discussed at meetings in Zurich this week.

Ethics judge Hans-Joachim Eckert will take the final decision on the fates of Blatter and Platini, who were questioned as part of a Swiss criminal investigation last week. Blatter is a suspect but Platini was questioned as between witness and accused person over a payment he received from FIFA in 2011.

Blatter has not yet received any news of the ethics committee's decision, long-time aide Walter Gagg told The Associated Press.

"I was with Mr. Blatter 10 minutes ago and we know nothing about (a decision)," Gagg said. "He left now. He had no news."

The statement from Diop also said the committee was evaluating the case of former FIFA vice president Chung Mong-joon. The South Korean has already confirmed he was being investigated for breaches relating to South Korea's failed bid for the 2022 World Cup and for openly criticizing the investigation.

"We are strictly limited in our possibilities to communicate ongoing procedures," Tenbuecken said.