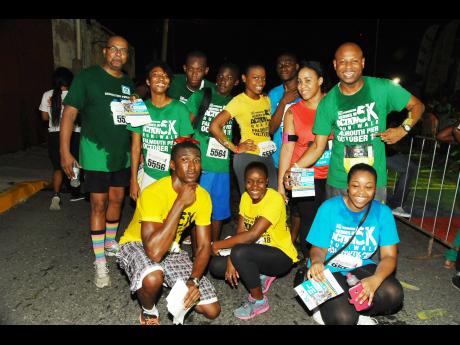 Contributed
Employees of the Jamaica National Building Society supported the Digicel 5K Imagine Run on Saturday, October 10, wearing the t-shirt advertising the Society’s upcoming JN Foundation Heroes in Action 5K Run/Walk, which will be attended by Usain Bolt. The event takes place tomorrow at the Falmouth Pier in Trelawny. Funds raised will benefit the Granville Place of Safety for Girls.

Both teams will feature a number of former national players, including the skilful Walter Boyd representing Nannyville and Durrent 'Tatty' Brown, who plays for Constant Spring. Both were members of Jamaica's historic team which went to the FIFA World Cup Finals in France in 1998.

Constant Spring, who recently defeated August Town 2-0 in the KO final, will parade a well-balanced team that has the knack for winning trophies. In addition to Durrent Brown, 'Spring' will look to former national players Oneil 'Chippy' McDonald, Lincoln Taffe, as well as Robert 'Bunny' Scott and Orville Mullings to pave the way for victory to complete a perfect season in the process. The team is coached by Carl Sewell.

The winning team will receive $50,000 and the League trophy.

Petrojam took an early lead through Boys' Town Premier League player, Rafeik Thomas, in the 10th minute, but Couples found the equaliser when Mauricio Gordon netted in the 18th minute.

Kemar Miller made it 2-1 for Couples in the 40th minute, but Petrojam's Andrew Christie made it 2-2 on the stroke of half-time.

BoJ on top in

Thanks to goals from Dashan Meeks, Patrick Campbell and Andre Campbell, BoJ extended their lead to six points from three matches, two ahead of defending champions Scotiabank, who were held to a 1-1 draw by Sagicor in the second match at the venue.

Jermaine Gardner sent Scotia ahead in the 37th minute, but this was cancelled out by a Paul Cunningham second-half goal. Scotia have four points from two matches.

The competition takes a break tomorrow for the Heroes holiday weekend.

Westmeade Rising Stars toppled neighbours Garveymeade 250-215 in the 10th round of the South East St Catherine Constituency Domino League - which is sponsored by Member of Parliament Colin Fagan - at the Garveymeade Sports Club last Sunday.

The win placed Westmeade in a three-way tie for second spot on 24 points from nine games. Also, on 24 points are Waterford which scored an important 250-226 win over fourth place Cumberland (21 points), and Ken's Wildflower, which beat last place Portsmouth (three) 250-224.

Runaway leaders Passagefort United (36) were idle this round.

Games on tomorrow (home teams named first): Passagefort United vs Portsmouth, Cumberland vs Garveymeade and Ken's Wildflower vs Waterford. All games are scheduled to begin at 1:00 p.m.

"As you are very much aware, finding funding to run our annual competitions is oftentimes a mammoth task. In our bid to grow the League and improve service to you, the Institute of Sports (INSPORTS) will be partnering with Jamaica Beverage Limited through their brand Chubby in staging the 2015 annual Primary School Football League," a statement from INSPORTS read.

Andrea Hanson, an INSPORTS Sports Officer for Portmore, said her organisation is in advanced negotiations with Jamaica Beverage Ltd with a view to sign a three-year partnership, which will see participating teams receiving bigger and better incentives.

The League is set to commence in November, with defending champions Portsmouth tackling Independence City Primary and Waterford opposing Bridgeport, the previous winners.

Horizon Park Primary School, located in Spanish Town, will on Friday, November 27, host a netball rally on their school grounds, starting at 8 a.m.

The organisers said that the event will be "unique, thanks to the special arrangements and efforts of their sponsors". There will also be special awards for the most disciplined team and leading goalscorer.

Teams wishing to enter should contact Vaswani Samuels at 981-8114 for assistance with registration. All entries must be received before the closing date of Friday, November 13. The cost of registration is $2,500.

The 2015-16 Manchester Football Association (MFA) season will kick off on Thursday, October 29, with the Brumalia House Knock Out competition.

The draw took place at the MFA offices at the RADA Complex earlier this week and 16 teams will compete. Defending champions Porus United will feature in the lone October 29 match against Old England.

A date is yet to be finalised for the other seven opening round games. Those games are: Alligator Pond vs Plouden; Hillstars vs Star Zone; Downs vs NCU; Ricam Academy vs Villa United; Mile Gully vs Greenvale; Comfort vs Technical Strikers; and Georges Valley vs Land Settlement.

The newcomers are NCU, Star Zone and Technical Strikers.

The League, which is sponsored by Central Manchester Member of Parliament, Peter Bunting, kicked off with two games at Comfort Community Centre. The second game saw hosts Comfort defeating neighbours New Hall 5-1. Thirty teams are contesting the League. Top Coffee Grove number among four newcomers in this the third season. The others are Belair Strikers, Bombay and May Day.

Matches will resume tomorrow with double-headers at five venues. Opening games kick off at 1:30 p.m., with the final games set for 3:30 p.m.

Belair have now moved to six points, following their opening round 3-0 shutout of Charagape. It was also a tough second round for Mount St Joseph in the female category, where they are also the defending champions. They were held to a 0-0 draw by Emmanuel, who were previously beaten 2-0 by Belair.

In other boys matches, Knox completed a 3-1 win over El Instituto, while in a surprise result, Yabnel edged Sacred Heart 1-0 on a Ramone Henry strike.

The most impressive scoreline of the second round came in the girl's competition, when Timika Scarlett's four-timer gave Belair a 4-1 win over Knox Prep.