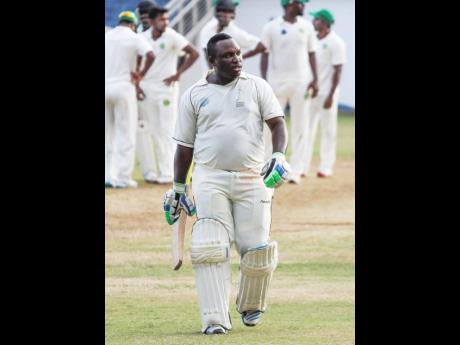 Title holders St Catherine Cricket Club, on the back of a half-century from sidelined national batsman Tamar Lambert, overcame the challenge of St Ann Cricket Association by 12 runs in their Jamaica Cricket Association 50-Overs Championship clash at Naranda Bauxite Oval in St Ann on Sunday.

Lambert, omitted from the Jamaica Scorpions 13-man squad for their opening four-day fixture away to Barbados, hit a topscore of 61 as St Catherine, batting first, posted a competitive 258 for eight.

All-rounder Gavin Wallace, 53, Shacaya Thomas, 42, and Danza Hyatt, 36, also got among the runs with Barbadian Kirk Edwards, in the 'Saints' line-up for the first time, scoring zero.

St Ann, in their reply, despite an impressive 124 from Xavier Marshall, were then bowled out for 242 with 14 balls to spare.

Stefan Casey, four for 47, and pacer Brian Buchanan, two for 53, claimed the wickets for the victors.

St Catherine CA, playing without inspirational captain Nkrumah Bonner, who left for the Leeward Islands last week, were dismissed for 161 off 37.2 overs.

Jamaica Under-19 batsman Leonardo Friginette, 54, Vinroy Crooks, 53, made the most runs for St James.

Kensington will square off with University of the West Indies (UWI) in semi-final two after both recorded wins over St Elizabeth and Kingston, respectively.

At Sabina Park, new national captain Paul Palmer Jr made 75 to pilot UWI to 283 for six.

Kingston, in their turn at bat, were restricted to 230, despite 95 from opener Garth Garvey, and 44 from young Brandon King.

Meanwhile, at Manley Horne Park, Kensington made 219 for eight before returning to limit St Elizabeth to 150 for eight, when bad light stopped play, to win under the Duckworth-Lewis method.

David Bernard Jr, 47 not out, Cassius Burton, 46, and Horace Miller, 36, made the most runs for Kensington with left-arm spinner Denniel Griffiths leading their bowling with two for 14.