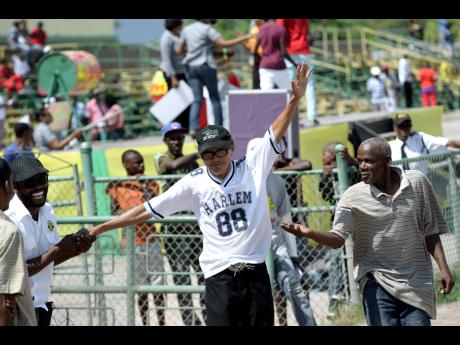 "Naggo Head Primary School's Family would like to inform the public that the Honourable Arnaldo Brown has contributed the sum of $200,000 to our sports programme. We especially are grateful for the $150,000 received on October 21. This was the balance of the above sum of $50,000, which was received prior to the beginning of this academic year," outlined Acting Principal of the institution, Lascelles Burnett.

He added: "We are looking towards his continued interest and support in our school and hope similar consideration will be forthcoming."

Scores of children were exposed to the various skills in baseball at the Edgewater playing field in Portmore last Saturday. The initiative is a major project of the Jamaica Baseball Association (JBA) and is part of an all-island project called 'Baseball roll-out'.

President of the JBA, Uel Gordon, has been busy getting schools registered as affiliates of his organisation.

The main aim of the project is to spread baseball through the length and breath of Jamaica. Primary and Preparatory schools will be taught the dynamics of the game and the theme for the project is 'pitch it', 'hit it', 'field it', 'catch it'.

Ken's Wildflower have all but qualified for the semi-finals of the South East St Catherine Constituency Domino League, which is sponsored by Member of Parliament, Colin Fagan, after a tight 250-246 battle over Waterford last Sunday.

With the win, Ken's progressed to 28 points and second place. Waterford remained on 25 points and lie in third place, with one game remaining. The league is led by Passagefort United, which have won all 10 matches to amass 40 points.

Passagefort easily dismissed Portsmouth 250-231 in their latest match, while Garveymeade's slim hopes of making the semi-finals got a shot in the arm as they shocked Cumberland 250-249 in a tense countdown. Garveymeade are now on 21 points in sixth place, while Cumberland remained in fifth on 22 points. Westmeade Rising Stars, who were idle, are fourth with 24 points from 10 games.

Acting Principal of Independence City Primary, Doreen Crawford, said the equipment will go a long way in allowing students to achieve their goals. The Kiddy Cricket program was introduced in Jamaica in 2000 and is part of Scotiabank's investment in the youth of the Caribbean. The program aims to help Primary school children to gain and maintain appreciation for cricket, the game that is deeply rooted in their West Indian Heritage.

Constant Spring, coached by Carl Sewell and managed by Neville Lyn, swept all before them in an unbeaten season, having won the KO final in beating August Town 2-1 and the mid-season final.

With former Reggae Boy, Walter 'Blacker' Boyd down to play for Nannyvillle, a large crowd turned up at the venue to see the skilful player in action. And he did not disappoint by scoring in the 38th minute to cancel out Mullings' 20th minute goal, to make it 1-1 at half-time.

Boyd circled the advancing Kirk Williams (captain) in goal and tapped the ball into an empty goal, much to the delight of the Nannyville supporters.

However, he was ejected from the game in the 60th minute when he was involved in a punch up with Constant Spring's right back, Ricardo Russell. Boyd was shown the red card by the referee, causing some commotion on the sidelines, but Russell was ejected as well on the intervention of the assistant referee.

With Boyd out, Nannyville lacked the necessary thrust from strikers Steve Green and Jahmiah Pettigrew, as they were foiled by some sturdy defence by former Reggae Boy, Durrant 'Tatty' Brown and Craig 'Warlord' White, while Mullings, Raymond 'Noonie' Smith and midfielder Robert 'Bunny' Scott took control of the offensive play.

Mullings seized the opportunity to complete his hat-trick with goals in the 62nd and 73rd minutes, while it ended 4-1 on the stroke of full time with an own goal.

Spit Fyah chalked up yet another victory, humbling Gregory Park-based Eradication 300-291 in the latest round of the Jamaica Domino Council Association (JDCA) League last Sunday.

The second annual Galilee Gospel Hall 5K will take place today in East Kingston, Jamaica. This race is put on in part for the Bower Bank Community. It starts at the Galilee Basic School, 2A Dunoon Road and will pass important markers such as Vaz Preparatory and Dunoon Park Technical High School, Camperdown High School, Bellevue Hospital, Vauxhall High School, Rae Town and onto Michael Manley Highway, which provides a great view of the Norman Manley International Airport.

Over 300 participants will take part in the event, which commences at 6:15 p.m. with a pre-race warmup and it starts exactly at 7 a.m. with race director, David Riley, coach of Excelsior High School's track and field athletics team and national youth coach.