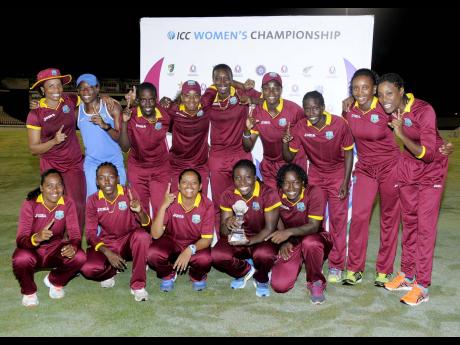 Chasing a modest 183 for victory at the Beausejour Cricket Stadium, the hosts cantered home in the 43rd over with their inspirational captain, Stafanie Taylor, stroking an attractive unbeaten 87 from 107 deliveries, to pick up the Player-of-the-Match award.

The win was the Windies Women's third on the trot after losing the opening game two Fridays ago and more importantly, saw them sweep the contests designated as ICC Championship games and grab the six vital points required to move to the top of the points table alongside the Aussies on 16 points.

A qualifying tournament for the 2017 Women's World Cup, the top four sides from the Championship will gain automatic qualification for the event scheduled for England.

"We executed really well throughout the series. We recognised the importance of trying to dominate this game and again, we did that really well," head coach Vasbert Drakes said.

"Our objective was to move up to the number one spot and it was a great series to do that and certainly that was one of the biggest motivating factors."

Sent in, Pakistan Women were restricted to 182 for five off their 50 overs, thanks to superb bowling from pacer Shamilia Connell, who snared three for 32 from her 10 overs.

Off-spinner Anisa Mohammed picked up two for 30, while Hayley Matthews strangled the visitors with her off-breaks in a 10-over spell that went for just 20 runs.

Asmavia Iqbal top scored with 44 not out off 43 balls batting at number seven, while Bismah Maroof chipped in with 41, Javeria Khan, 25 and captain Sana Mir an unbeaten 24.

In reply, West Indies lost Matthews without scoring with six runs on the board in the fourth over and were further set back when they also lost the other opener Kycia Knight for 19 at 32 for two in the ninth.

However, any fears of a West Indies Women collapse were quickly dashed as Taylor took control in two telling partnerships.

First, the right-hander put on 54 for the third wicket with Deandra Dottin, who struck 25 from 43 balls with a four and a six. When she departed in the 23rd over to a catch at the wicket off leg-spinner Bismah, Taylor found an ally in former captain Merissa Aguilleira, who stroked an important 37 off 62 deliveries with two fours.

Taylor played with assurance, gathering 10 boundaries to dominate the innings and record her second straight unbeaten half-century of the tournament.

Overall, she finished with 261 runs at an average of 130, to also cop the Player-of-the-Series award.

The two teams will now turn their attention to the three-match Twenty20 series, which bowls off in Grenada on Thursday.