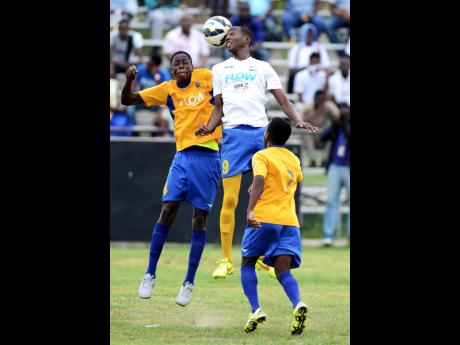 Hydel High halted their recent losing skid and surged into sole leadership of Group I courtesy of a 3-0 whipping of red-hot Denham Town, in second-round action of the ISSA-FLOW Manning Cup football competition at Spanish Town Prison Oval yesterday.

Hydel's charge was led by Nicholas Nelson, who scored in the sixth and 44th minutes. Nelson's tally is now at 11. Stephen Barnett scored the third goal, finishing off a rebound from a 29th-minute penalty. Barnett has netted 10 times this campaign.

Besides them, Rodario Edwards put in a Man of the Match performance, bolstered with two assists.

"We did what we had to do to win. The competition is wide open. Playing in the second round of the Manning Cup, the most important thing for us to do is try and qualify, then we take it round by round. Our intention is to always try and win and play tactically," Maxwell said.

"To see us lose like this was really bad, after winning seven games. Actually, we have two games to go, and who knows what will happen? That's six points we have to play for and it still can allow us to advance," he reasoned.

Meanwhile, former champions Camperdown High continued to have a less-than-stellar season in the competition, with a come-from-behind 1-1 draw with Innswood High School in the day's curtain-raiser, played at 1 p.m. at the same venue. Sanjai Nelson scored for Innswood in the 31st minute, while Camperdown pulled one back from a 49th-minute own goal.