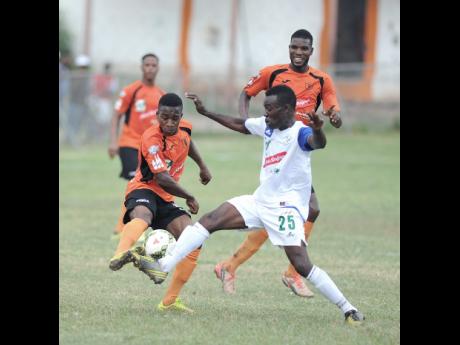 In other games, Cavalier play Humble Lion at Stadium East, Rivoli entertain Tivoli at Prison Oval, Waterhouse take on Boys' Town at Drewsland, and UWI host Reno at UWI Bowl. All games will start at 3 p.m., except the Cavalier-Humble Lion encounter which begins at 5 p.m.

Since beating Waterhouse in round four, Harbour View had to wait five rounds before tasting victory. The points lifted the east Kingston club two places up to seventh, and they will fancy getting a result against Portmore, who have drawn their last three.

GOALS HARD TO COME BY

Portmore have found goals hard to come by lately. After netting five in their first three, they've only managed two in their last five.

However, the former winners have continued to keep things tight and just need to sort out their goalscoring issues.

Usually, when Boys' Town and Waterhouse meet it is a top-table clash, but not so this season.

Waterhouse are currently in the relegation zone, in 11th on seven points, with two wins from eight games. Boys' Town are two points better and two places higher with the same number of wins from as many matches.

The season looks bleak for both teams, so they have all to play for.

Things are going downhill fast for Cavalier, who are winless in five and have slipped from third to 10th.

They will have a tough task halting their losing slide against fifth-place Humble Lion.

A point separates sixth-place Tivoli and eighth-place Rivoli, and both are keen to return to winning ways.

Reno will start favourites against UWI, but the home team cannot be underestimated.