Holy Trinity footballer to get help from PLCA 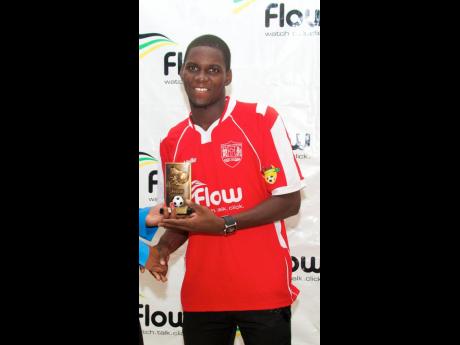 Cancer-stricken Holy Trinity High footballer Jordan Foote has expressed his appreciation to the public for their financial support and the hundreds of get-well messages as he fights to recuperate from bone cancer in his knee.

Foote was outstanding for his school last year as they surprised even themselves by reaching the FLOW Super Cup final.

The 17-year-old is hospitalised with a condition that requires an urgent operation and he has been ruled out of this year's ISSA/FLOW Manning Cup.

"I am feeling all right and positive. My pain is on and off," Foote told The Sunday Gleaner during a telephone interview which was facilitated by his mother, Nadine Sutherland, yesterday.

"I thank everyone for their support. I miss playing football and I hope to play again soon. On Monday, the doctors will decide what next, so I am hoping for the best," he outlined.

Lloyd is leading an initiative dubbed 'Football is life and our life is football' and approached PLCA general manager and Boys' Town coach Andrew Price for assistance.

"I want to start a fund for the young man, and I have asked all players and officials of PLCA Jamaica to contribute a $1,000 to help with surgery. I will start the ball rolling by contributing the first $1,000. Each one help one," Lloyd said.

"From a PLCA perspective, all clubs will give $30,000 from their monthly drawdown. We want to reach out as players and former players because this is an outstanding young player who played for his school as we did, and we should stand united in support of him," Price said.