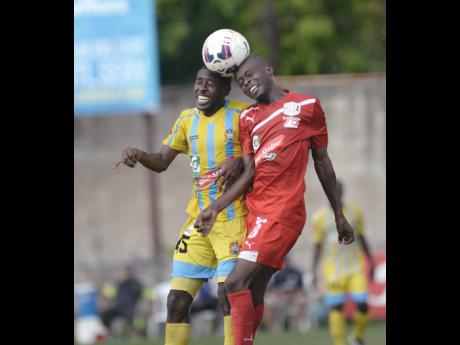 Shamar Nicholson netted the game's only goal after three minutes to give the 'Red Brigade' their first back-to-back wins for the season.

On the contrary, defeat sunk Waterhouse to the bottom of the standings.

In terms of a start, it has been far from the best for the famed 'Red Brigade', but coach Andrew Price said they were determined to celebrate the occasion with a victory.

"The day started right; we had a church service this morning for our 75th anniversary, and the message we got from our chaplain was very inspirational. One of the things he said was that we are only as strong as all of us, and I think it resonated with the players as they dug in today (yesterday) and really fought hard," observed Price.

"It wasn't the prettiest, but we fought, and I believe it was a just result," he added.

Teenager Nicholson put the visitors ahead after just three minutes of play, when he took advantage of a scramble in the box to score.

Boys' Town were better in the first-half, although the best chance of the period fell to Sean Coleman, who opted to pass with the goalkeeper at his mercy and the chance went a-begging.

After the break, Waterhouse controlled possession, but both teams showed why they are struggling in the lower half of the table, as chances were minimal.

However, towards the end, Waterhouse stepped up in search of the equaliser, and Kenroy Howell, Omar Walcott and Jermain 'Tuffy' Anderson all had very good opportunities to steal a point, but they all failed to find the net.

"We are still missing chances after chances, but once we can get that right in front of goal, I think we will be okay," said Waterhouse coach Anthony Patrick.

The win lifted Boys' Town one place up the table to eighth with 12 points, while Waterhouse hit rock bottom as they are bottom of the League with seven points, one behind UWI, who drew 2-2 with Reno.

Junior Flemmings continued his fine form, scoring the lone goal in Tivoli Gardens' 1-0 win over Rivoli United at Spanish Town Prison Oval, while Humble Lion beat Cavalier 1-0 on a late goal from Devon Hodges in their clash at Stadium East.