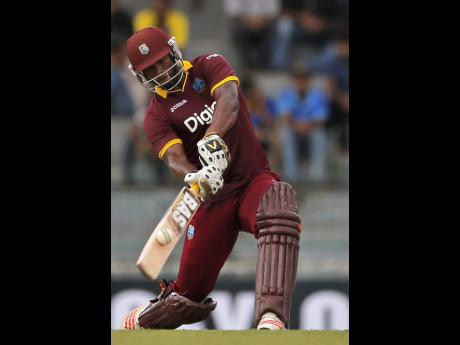 Opener Johnson Charles says he will be gunning for three figures in tomorrow's final One-Day International (ODI) against Sri Lanka as he looks to build on his exciting half-century in the second game here Wednesday.

The 26-year-old pummelled a stroke-filled 83 at the R. Premadasa Stadium, but it proved in vain as West Indies went down by eight wickets to concede the three-match series with a game remaining.

Despite the loss, Charles said he felt good about the knock and would be looking for something bigger in the next game.

"I think it was a controlled innings, but at the end, I couldn't carry on, and that was a disappointment, but coming back [into the team], it was a good start, and I'm looking to build on it and get some bigger scores - a hundred, 150 - [in the] next match," he said.

Though West Indies crashed to 29 for two in the fifth over, the right-handed Charles backed himself and played his shots, hitting seven fours and four sixes to post his fourth ODI half-century. In the process, he powered a 70-run third-wicket stand with Darren Bravo (21) before adding a further 40 runs for the fourth wicket with stand-in captain Marlon Samuels, who made 63.

Charles said it was important for him to remain positive despite the loss of wickets and especially facing a new-ball bowler like Lasith Malinga.

"My approach basically is to be as positive as possible. From the time I've known myself, that's how I've batted," he said. "If I've got to start the rebuilding process, I've got to do it my way, and that's how I chose to do it."

He added: "I know Malinga has a very good slower ball and a very good [bouncer], so I just looked out for these two, not barring the fact he swings the ball away from me. It's always a difficult task to start an innings, but you've just got to stick in there and do it how you know to do it."

After a three-hour rain break forced a reduction in overs to 38 per side, West Indies saw their innings tail away badly in the dying stages as they lost four wickets for three runs in the space of five deliveries - with all four wickets falling via the run-out route.

Charles said this could have been the turning point of the contest, with the Caribbean side limited to 214 and setting Sri Lanka 225 under the Duckworth/Lewis method.

"Having four run outs and having one of our set batsmen [getting out] out, you never know how much we could have gotten," Charles pointed out.

"With two overs to go, we could have gotten 15 to 30 runs, and that could have been a major difference. I think it hurt us a bit, and had we not lost those four wickets at a crucial time, I think we could have actually pulled it off."