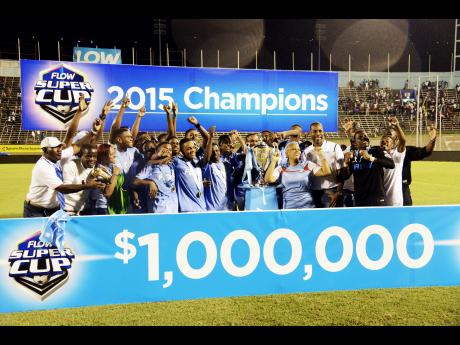 St George's College's Alex Marshall emphatically led his school to a 4-0 drubbing of outgoing champions Jamaica College for their first hold of the ISSA-FLOW Super Cup.

The 'dream final' many were hoping for got under way at 6 p.m. in front of a jam-packed National Stadium.

Marshall was as swift through JC's defence as a ghost through fog and was clumsily dragged down inside the penalty box by defender Ajeanie Talbott with just four minutes on the clock.

St George's' tried and proven penalty taker, Gregory Messam Jr, stepped up and clinically dispatched to the left of goalkeeper Jahmali Waite to open the scoring in the fifth minute.

Marshall again was onside to collect an aerial ball from his captain, Shevon Stewart, who floated a deft ball to his feet, which he bulleted high and hard into JC's net in minute 14 for a 2-0 lead.

St George's' notorious number 11 was too menacing for JC and on resumption for the second half, he sparked them to their third and fourth goals.

Ajeanie Talbott kicked Marshall to receive his second yellow card and subsequent sending off, as JC went one man down.

Ronaldo Watson then stepped up to score that free kick from 24 yards in minute 53.

Marshall again cut through JC's defence like a hot knife on butter, to complete a brace in minute 58. Marshall has netted 23 goals so far this season.

For JC, midfielder Cheavoun Crooks saw his torrid shot denied by goalkeeper John Wilson, while Talbott fired a stinging shot, which was saved in the first half.

Meanwhile, in the third-place play-off, Wolmer's Boys' clipped St Jago High 2-1 in the curtain-raiser at the same venue.

Stuart Payne sent Wolmer's ahead inside 19 minutes, while Delano Smith drew the Monk Street-based St Jago level with a 72nd-minute strike. Andrew Daley pulled Wolmer's back into pole position one minute later with a game-winning strike.