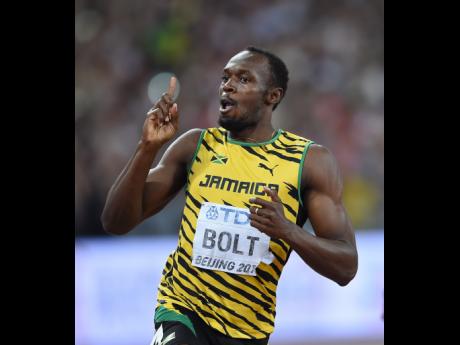 Bolt in running for Athlete of the Year

Sprint superstar Usain Bolt is among three athletes on the shortlist for the 2015 IAAF World Male Athlete of the Year award. The Jamaican sprinter has been selected along with the American pair of Ashton Eaton, a decathlete, and Christian Taylor, a triple jumper.

Bolt successfully defended his 100m, 200m, and 4x100m titles at the IAAF World Championships in Beijing in August and clocked a world-leading time of 19.55 when winning the 200m.

Taylor won the triple jump title in Beijing with a North American record of 18.21 metres, the second-best jump in history.

Last month, the IAAF Family, which includes top athletes and agents, IAAF officials, and selected media representatives from around the world, was asked to select nine men and nine women from 10 categories.

The top-voted athletes in each category formed the long list, from which an international panel of 10 experts selected the three finalists.

Trinidad and Tobago Red Force pacer Shannon Gabriel will part with 70 per cent of his match fee after being found guilty of dissent during the second-round game in the Regional First Class Championship against Barbados Pride last weekend.

The 27-year-old shouted an obscenity after an appeal for lbw was turned down by the umpire during the Pride first innings. This was considered a show of dissent at the umpire's decision. He was initially reported for a Level One breach of the Code of Conduct, but this was upgraded to Level Two because the player had committed the same offence within the last year.

Meanwhile, Pride left-arm spinner Jomel Warrican was also fined, but only 10 per cent of his match fee, after also being charged with showing dissent. After being given out in the first innings, he remained at the crease and opened his arms, appearing to question the umpire's decision.

The deadly attacks in Paris won't deter the French capital's bid to host the 2024 Olympics. Tony Estanguet, co-president of the Paris candidacy, said at first after the attacks "you forget about your business and your work and for some days we were not concerned about the bid".

But Estanguet told The Associated Press that the team is now determined "more than ever" to secure the Games, offering Parisians a chance to "share good moments, positive moments".

Exactly a week after the attacks that killed 130, Estanguet was in Prague to attend the general assembly of European Olympic Committees.

Russia's athletics federation says three athletes have been found in breach of its suspension from international track and field. World athletics governing body IAAF suspended Russia last week, and their athletes are only allowed to compete in domestic events.

In a statement on the Russian athletics federation website, General Secretary Mikhail Butov said the IAAF notified the federation of three cases in which Russians have "taken part in marathons and races on November 14 and 15" in violation of the

One of the three is believed to be Viktor Ugarov, who won the Kanazawa marathon in Japan on Sunday, two days after the suspension was announced, and was later disqualified. The identities of the other two were not immediately clear.

Neither player had much at stake as Nadal had already clinched first place in the group and Ferrer had been eliminated, but the two baseline sluggers still went at it relentlessly for more than two and a half hours in a match full of heavy hitting and long rallies. Nadal earned the decisive break to go up 5-4 in the third set - having previously wasted five break points in a marathon first game of the decider - and sealed victory with a backhand volley winner.