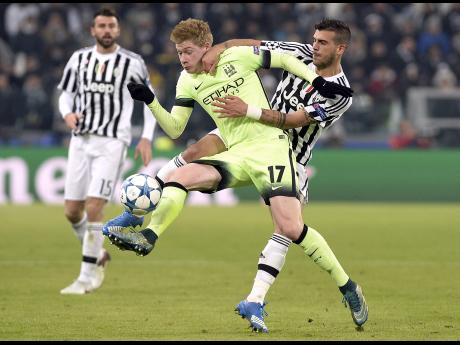 Zlatan Ibrahimovic celebrated his return to his first senior club with a goal as Paris Saint-Germain advanced to the knockout phase of the Champions League yesterday, while Juventus claimed top spot to qualify from Group D with a 1-0 win over Manchester City.

In Group B, Manchester United were left frustrated by another lackluster performance in a 0-0 draw against PSV Eindhoven at Old Trafford. The group remains wide open and will be decided on the final day after Wolfsburg moved to the top of the standings with a 2-0 defeat of CSKA Moscow.

Ibrahimovic played his first competitive club match at his hometown team Malmo since joining Ajax in 2001. He marked the occasion by netting PSG's third goal, with Laurent Blanc's players thrashing their Swedish opponents 5-0 in Group A.

Already qualified before traveling to Ukraine, 10-time European champions Real Madrid conceded three goals in 12 minutes, yet still came away with a 4-3 win over Shakhtar Donetsk in the group's other match. Cristiano Ronaldo scored twice as Madrid made sure of finishing on top.

Atletico secured their place in the next round with a 2-0 victory over Galatasaray in Group C and will travel to Benfica to decide first place in two weeks' time. Both teams have 10 points after Benfica recovered from a two-goal deficit to draw 2-2 at Astana.