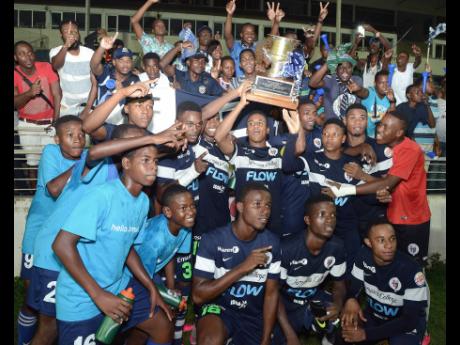 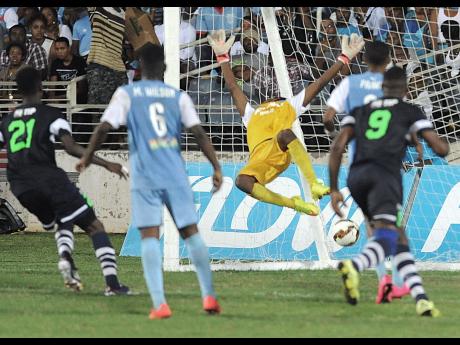 A brilliant header, with his back to goal, by forward Donovan Dawkins, sealed a third consecutive ISSA-FLOW Manning Cup title for Jamaica College (JC) at Sabina Park yesterday.

The 1-0 victory gave the Old Hope Road-based JC their 27th lien on the coveted trophy.

Dawkins' strike decided a very close and competitive match, which saw both teams defending stoutly throughout the entire contest.

"Prevailing in the face of adversity and against all odds," were the comments of Jamaica College's team manager, Ian Forbes, after his team went into the final as underdogs and came away victorious.

Goalscorer Dawkins was one of the happiest players in the park.

"I feel good because my captain told me I could do it, and I came out, scored, and won the Manning Cup in my second year at JC. I am very happy," he told The Sunday Gleaner.

"Trust me - fight, determination and guts. Of course, one College - not St George's College or Munro College. No team can beat Jamaica College twice in a competition," Brown boasted.

Outstanding St George's centre forward Alex Marshall was kept quiet for much of yesterday's match as he was closely guarded by Brown and his troops.

St George's captain Shevon Stewart fought hard to keep his team in the game, but yesterday, JC were a much more organised unit than the team which was drubbed 4-0 in the Super Cup final.

Stewart saw a powerful shot blocked by the leg of JC captain Allando Brown, while Marshall, in one of his few clear chances, fired straight at goalkeeper Jahmali Waite.

Winning coach Miguel Coley said: "I just want to apologise for the 4-0 Super Cup loss. We took it and bounced back. It (yesterday's final) was a tough game. St George's are a fantastic team and we had to counter them with physical play and good man-marking. Teamwork makes the dream work," he added.

St George's Neville Bell, who saw his team slip to their first scoreless Manning Cup game of the season, said: "It's their (JC's) time. They wanted it; they deserved it."

Earlier, Michael Beckford scored his first goal of the season to lead Jonathan Grant High School to their first third-place finish in the competition. Beckford climbed beautifully above the Denham Town High defenders to head home a Mario Desouza cross in the 48th minute.