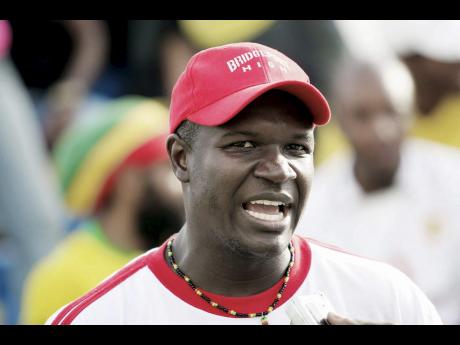 Contributed
Anthony Patrick ... speaking to the media in 2006 while he was the coach at Bridgeport High.

Anthony Patrick is a name synonymous with excellence in football, and it is clear he has brought that most desired attribute to the Dinthill Technical's head-coach role.

In his first year coaching at the school, they have managed to make the final of the daCosta Cup for the first time in 34 years, thanks in part to the philosophy of team-work and dedication.

Patrick is no stranger to success in schoolboy football. He guided Bridgeport High to Manning Cup titles in 2001 and 2006. He also won the Walker Cup and one Olivier Shield title. Now he has a chance to join a very select group of coaches to have won both the Manning and daCosta Cups. The list comprises stalwart coaches Jackie Walters, Oliver Clue and Frank Brown.

Players believe in themselves

He takes his own style of play to the former two-time daCosta Cup winners, now in search of a third, and he has got them believing.

"I have a simple way of doing things, and that is just doing it the best way possible. I try getting my players to believe in themselves and the best will come, and so far, the proof is that we are in the final," said coach Patrick.

"I have a serious love for the game and in coaching the youngsters. They are always eager to learn and that is what I appreciate most," he said of his team.

"With me here, it has brought a certain level of self-belief in the youngsters and it's very important.

Patrick also held coaching positions with former four-time Premier League winners Portmore United and Waterhouse and was at the helm of Naggo Head FC's rise to the Premier League several years ago.