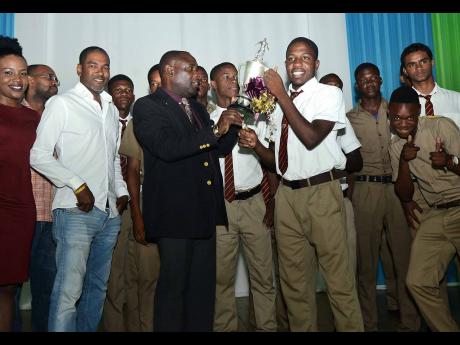 Ian Allen
Principal Dr Walton Small (third from left) handing over the ISSA-FLOW Walker Cup to Wolmer’s Boys’ captain Kashaun Smith at a victory celebration ceremony held in the school’s auditorium yesterday. Also in photograph (from left) are Olivia Rose, Wolmer’s Boys’ football team psychologist and Kurt Boothe, team manager. Looking on in the background are other members of the Wolmer’s management team and players. Wolmer’s defeated St George’s College 5-4 on penalties in Wednesday’s final at the Stadium East.

They might not have been the most talked about or the loudest in the recently concluded corporate area schoolboy football competitions, but newly crowned ISSA-FLOW Walker Cup champions Wolmer's Boys' celebrated Wednesday's 5-4 penalty triumph over St George's College in fine style inside the Douglas Orane Auditorium, at Heroes Circle yesterday.

The early morning devotion was brief, but set alight an otherwise quiet and serious morning of end of term exams. It clearly brought smiles to the faces of the student population and administrative staff.

Principal Dr Walton Small took time out to parade two trophies, the Walker Cup and the trophy for topping the recent tennis tournament. Members of the school's water polo team were also lauded for their performances in their recent championship.

"I have a sad story to tell you, about the defeat of George's. They came with great expectations, but returned with a box load of shaving cream," Small sang jubilantly to rapturous applause and laughter from a full auditorium.

Chairman of the Wolmer's Trust, Milton Samuda, said: "The real effort took place long before our team hit the field of play, and I want you to congratulate them for that and to acknowledge that it is a part of our heritage that whatever we do, we do to the best of our ability." he told the audience.

Team manager Kurt Boothe reflected on the past season:

"As a management team we had set out a chart of goals and number two was to win trophies. Number one goal that we had set out for this football programme is to be the school that gets the most football scholarships ... and I am proud to say that in the past two years we have got 15 scholarships.

Distinguished old boy, Douglas Orane, after whom the auditorium is named, hailed the Walker Cup winners.

"This (Walker Cup) is very special. They have worked very hard all season and remained very disciplined," he said. He added that their objective is to count both goals and scholarships and produce well rounded young men for leadership roles in Jamaica.

"There is a great demand from young men to come to Wolmer's and what we want to do is ensure that we keep the standards high," Orane told The Gleaner.