Sherwin Williams to decide on women's sponsorship next year 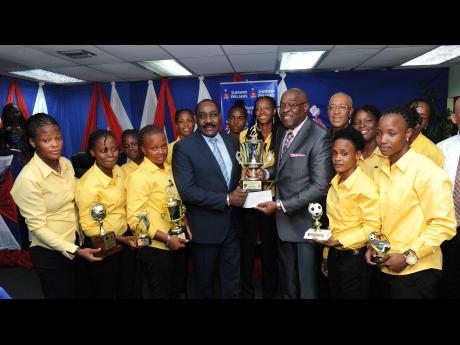 Managing director of Sherwin Williams Limited, Ian Forbes, says his company is committed to women's football in Jamaica, but are undecided on whether they will be back as sponsors of the Sherwin Williams Women's League next season.

Sherwin Williams has been involved as sponsors for the past 14 years. However, speaking at the awards ceremony yesterday at the JFF's offices in New Kingston, Forbes said the paint company will make an announcement by late February.

"Resources are not unlimited, so one has to look at the organisation and see what can be done. We are going through the process of evaluation, and then (we will) make a decision by late February (2016)," Forbes told The Gleaner.

Meanwhile, Barbican FC walked away with the majority of the awards at yesterday's ceremony. Barbican won the Sherwin Williams League for the eighth consecutive year and the Colourscape Knockout for the third straight year.

Rochelle Bryan of Barbican was voted the Most Valuable Player for the season, while her teammate, Tasheka Small, was MVP for the final. The top goalscorer award was shared by Venecia Reid of G.C. Foster, Rashana Palache (Los Perfectos) and Kenesha Reid of Barbican, with 17 goals each.

Top goalkeeper was Abbigayle Palmer of Barbican, while Charles Edwards was voted coach of the year. All awardees collected cash prizes and trophies.

In the Colourscape KO, Barbican collected the winning trophy and $100,000; Waterhouse won $60,000 for second place; Los Perfectos received $40,000 for third; while G.C. Foster earned $20,000 for fourth spot. Barbican's Kenesha Reid was the top goalscorer and MVP of the final.