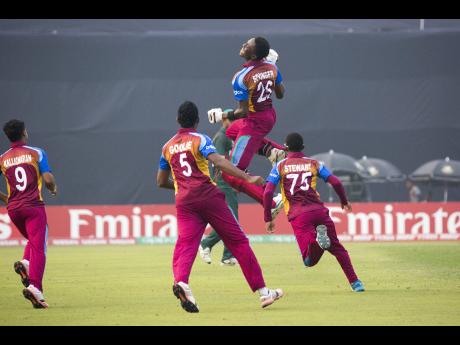 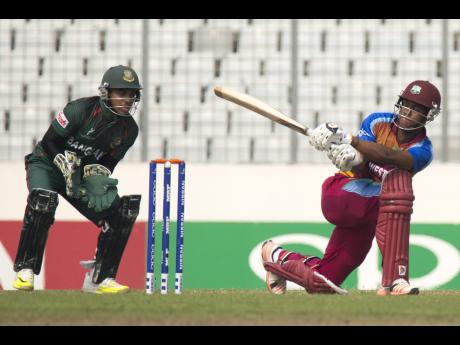 Photo courtesy of ICC
West Indies Under-19 captain Shimron Hetmyer sweeping for four during yesterday's ICC Under-19 World Cup semi-final between West Indies Under-19 and Bangladesh Under-19 at Sher-e-Bangla National Cricket Stadium, Mirpur Dhaka. Hetmyer made 60. At left is wicketkeeper Zakir Hasan.
1
2

West Indies will make their second appearance in the Under-19 World Cup final after a stunning three-wicket victory over Bangladesh in the semi-final at Shere Bangla National Stadium yesterday.

West Indies, inspired by an all-round performance from man of the match Shamar Springer, silenced more than 10,000 fans at the stadium with a gutsy run chase to overhaul the 227 runs set by Bangladesh who won the toss and elected to field.

Keemo Paul destroyed the Bangladesh lower order, grabbing three for 20, including the important scalp of captain Mehedi Hasan Miraz, who led the innings with a half century.

Half centuries from Shimron Hetmyer and Springer, under pressure, complemented a positive innings from opener Gidron Pope as the visitors negotiated some anxious moments before romping to victory with eight balls remaining.

They will now contest the showpiece championship match against India in Mirpur on Sunday.

Pope, who was dropped on 23, started the chase in aggressive fashion, clobbering 14 runs in the first over on his way to 38.

West Indies, who were cruising at 147 for three, had lost two quick wickets, including Pope, who laid the foundation by putting on 44 runs for the first wicket with Tevin Imlach.

Hetmyer arrived to lead the recovery of an innings which appeared to be wobbling and compiled a 64-run stand with Keacy Carty.

Heymyer's score of 60, his second straight half century, included 7 fours and a six, while Carty picked up two boundaries in his contribution of 22.

Hetmyer's departure threatened to tilt the game towards Bangladesh but when Jyd Goolie joined Springer, the two gathered 30 runs for the fifth wicket to take the score past 175.

The run chase was disrupted again when left-arm spinner Saleh Ahmed Shawon, Bangladesh's chief wicket taker with three for 37, struck twice in four balls to remove Goolie for nine and Paul for four.

But Springer weathered the threat by teaming up with Michael Frew to steal singles and twos in a patient stand of 36.

Springer, dropped on 15, was unbeaten on 62 with five fours and a six, and scored the winning runs for West Indies when he smashed Mohammad Saifuddin through the covers for four.

Earlier, captain Mehedi was forced to rescue his side with a top score of 60 after they had slumped to 88 for four.

Mehedi stitched together an 85-run partnership with Mohammed Saifuddin for the sixth wicket, which lifted the homeboys from 113 for five to almost 200.

Paul broke the partnership, capturing the wicket of Mehedi and added two lower-order wickets to finish with impressive figures of three for 20 from three overs.