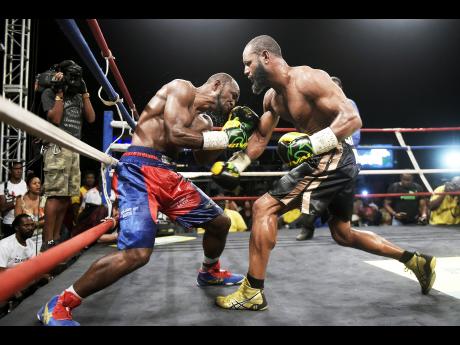 Gladstone Taylor
Sakima 'The Mauler' Mullings (right) fires a body shot to Tsetsi 'Lights Out' Davis in their Contender Series semi-final at The Mico University College on Wednesday July 5.

Ever since its inception, the Wray and Nephew Contender boxing series has breathed new life into the sport of boxing in Jamaica. There was a conspicuous lull in activity and interest in the sport locally before the Contender (now in its seventh season) hit the screens of Television Jamaica and the hearts of many Jamaicans.

Outside of the novelty of the first season, this year's show has been by far the most exciting and spectacular. The even matchups between the Jamaican and Canadian boxers, plus the significant increase in prize money, have no doubt influenced the level of intensity and the quality of the boxing on show.

The live audiences have grown and seem more animatedly involved in the fights week after week, the regularity and intensity of the general discussion, and debates ignited by each fight are also indices of the growing television numbers this season. One important intangible that the organisers of the show would probably not willingly admit to, is that the incidents of controversy have added interest and appeal to the Contender series. While there remains the danger of the integrity of the product being compromised, controversy has always been an integral part of the sport of boxing. Ranging from the pre and post-fight banter and utterances to suspicious judging decisions, these talking moments have traditionally provided pivotal marketing moments for the sport of prize fighting.

Topping the list of newsmakers for this year's Contender series is the now veteran Jamaican challenger Tsetsi 'Lights Out' Davis. The unassuming Davis has unwittingly become a major magnet for controversy from his repeated difficulties in making the weight and having to run through, and inexplicably getting lost in, the streets of New Kingston in his quest to lose four or five pounds, to his entry into the ring for his first bout against the Canadian Dave Leblond, where Tsetsi was booed by the Jamaican crowd after securing a close split-decision win.

His value as a headline maker was upped again when the organisers 'found a way' to put the vanquished Leblond back into the series. That sequence of events obviously followed Davis into the ring for his quarter final matchup against the highly fancied Canadian Ryan Young, only for the 39-year-old Davis to find the inspiration and will to demolish the much younger Young, emphatically silencing his 'booing critics' and set up a semi-final clash with contender poster boy and perennial crowd favourite Sakima 'The Mauler' Mullings. The enigmatic Tsetsi Davis was once again the talk of the town.

The question on the lips of every local boxing fan was, can the ageing Davis, who they all gave the thumbs down and condemned to the pile of has-beens, fight another fight like he did against Ryan Young? Surely not! Davis will be destroyed by the classier and more skilled Mullings. That seemed to be the clear consensus of even the few remaining Tsetsi fans going into the semi-final.

In what has become the mother of all controversies this season, an inspired and obviously confident Davis stepped into that semi-final and, in the eyes of many, clearly outsmarted, outfoxed, outlasted and beat down Sakima Mullings. His performance shocked the thousands in attendance at ringside into stunned silence, and set the hundreds of thousands watching on television talking, only to see the judges hand a split-decision win to a surprised and relieved Mullings. That fight, and the ensuing split in public opinion, sparked discussions and debates never seen before in the seven-year history of the Contender, again piquing the interest in the series.

Tsetsi Davis has since told me he will never fight in the Contender again. I proceeded to have a bet with him that he will be approached for next year's season for the simple fact that he was so pivotal to the hype of the show this year, so he should not be surprised if the promoters come calling. I urged him to name his price and stand his ground because for some reason controversy seems to be following him, and everyone, including the promoters, know that controversy sells boxing, and controversy sells the Contender.