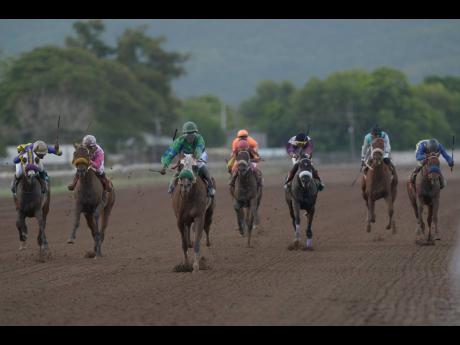 EXPECTATIONS of another smashing performance from United States-bred SPARKLE DIAMOND, unbeaten in his three previous races, were quashed yesterday when the chestnut gelding reared in the gate and was scratched from the Caymanas Anniversary feature event at seven and a half furlongs.

Leading trainer Anthony Nunes’ FAYROUZ capitalised on the impressive foreigner’s absence to pounce on long-time leaders SERGEANT RECKLESS and KAPPONE, coming off the home turn, to score an easy two and three quarter-length win ahead of late-closing UNCLE VINNIE.

A winner of three races from four starts, including the joint-fastest five and a half-furlong time clocked this season, 1:05.3, SPARKLE DIAMOND is considered to be among the top horses in the country, seeking qualification for November’s US$115,000 Diamond Mile.

Despite SPARKLE DIAMOND earning $1.5 million in four starts, new rules for this year’s race only take into consideration purses won in overnight and open allowance races, seven furlongs and longer, grade one events from six furlongs, in addition to win-and-you’re-in events such as the derby, this Saturday’s Gold Cup, the Invitational Mile, Caribbean Sprint, and the Superstakes.

Yesterday’s race would have been SPARKLE DIAMOND’s first run among overnight allowance company, putting them in an even tighter race against time to earn enough purse money to qualify for the November 9 event.

FAYROUZ, who was pulled out of the event last year to make way for stablemate and eventual runner-up BIGDADDYKOOL, earned $546,000 towards her quest, pushing her earnings to approximately $1 million.

Nunes is already guaranteed one starter, Jamaica Derby winner SUPREME SOUL, whereas BIGDADDYKOOL, FAYROUZ, and, possibly, HOUDINI’S MAGIC could land him as many as four qualifiers to take on rival Wayne DaCosta’s powerhouse duo, imported STRANGER DANGER and 2017 winner SHE’S A MANEATER.

Meanwhile, last year’s winner, WILL IN CHARGE, has a conditional Diamond Mile wildcard entry, which he has fulfilled, but he has been out of training since injuring himself when getting a bad break in the Viceroy Trophy.

McGregor’s winners were SWEET DESTINY in the third and FORT KNOX in the eighth, respectively.

Leading rider apprentice Christopher Mamdeen made all with 10-1 shot STORM to bring down the curtains after his closest pursuer, batchmate Reyan Lewis, won aboard 3-1 chance FAYROUZ.