Winning at all costs 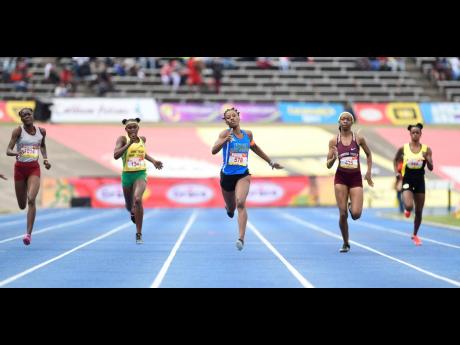 Gladstone Taylor
Hydel High School’s Charokee Young (centre) wins the Class One Girls’ 400m final in a time of 52.48 seconds at the ISSA/GraceKennedy Boys and Girls’ Athletics Championships (Champs) on Saturday, March 30. Champs is considered an example of ‘children at play with the highest profile.’

In the beginning, the aim of sports was to “use, maintain or improve physical ability and skill, while providing enjoyment to participants and, in some cases, entertainment for spectators”. Today, that aim is only seen in interform and interhouse sport competition in schools. Cash, and the other incentives that defray the cost of taking part in sport has made winning the most important aim of sports thus, in my view, diminishing the true aim.

Children at sports are taught responsibility, respect, self-discipline, accountability and teamwork. Necessary templates for life as an adult in a world where nothing is given, where everything is earned. For many, sport is now a job. As a result, winning is everything. Every aspect of sport, from the preparation, training and performance, has the ultimate aim: to win. This focus has led to unbelievable, fantastic performances that push the previously thought impossible to be very possible.

Recruitment is that American invention that sees schools and colleges ignore the very reason for their existence to bring in to their hallowed halls, children and very young adults with either no academic qualification or very dubious test scores. This focus on winning has now infiltrated local school sports or children at play. Recruitment, gaining places in these institutions, thus denying very qualified others with sporting ability an education. So, the Olympics, the last bastion of amateur sport, relented and now the professional sports person dominates ALL competition in sports, and those who play to maintain or improve physical ability or skill, while providing enjoyment to participants, and in some cases enjoyment for spectators, are relegated to their backyard or nearby open field. In modern sports, winning IS everything.

So the positions at stake, which are traditionally unpaid positions, see those vying for position using well-oiled and professional pre-election tactics to ensure victory. When those tactics appear to be failing, fisticuffs, social media rumours and downright fake news are all a part of the armoury in the fight for position.

Now that the position of choice where the victor now has THE say in who is selected or not is gained, the true nature of the victor comes to the fore. The methods by which athletes are selected are shrouded in secrecy, and very little explanations are forthcoming when blatant omissions are questioned or when some with very dubious qualifications find themselves selected becomes the norm. ‘Ah suh di ting set’ is the default position of those who cannot in all conscience explain the omission or addition.

Locally, no sport seems to be exempt from peculiar selection policies. In netball, the arbitrary expulsion of our best players eventually resulted in revolt and the unceremonious removal of the architect. Having not learnt anything from that debacle, there is now a move to exclude our best from the team. In track and field, the initial denial of one of our best from competing in the World Championships resulted in a national and international backlash that saw the powers that be sheepishly relenting and reversing previous decisions. In football, the same. Sustained fan and media pressure eventually resulted in our best men and women being selected. Yet, those responsible merely shrug and mouth ‘Oops’ and remain in position to, no doubt, try again when it suits them.

It is said that transparency is the nemesis of demagogues and quasi-dictators. Term limits are one way of combatting this malady. The other way is an unrelenting and sustained fan objection, in media – electronic and on paper – coupled with a lack of fear of the expected backlash from those exposed. It is that fear which those in power use to continue their nefarious activity. Vigilance is our only weapon against them. Let us not relent, and speak up when our best are arbitrarily excluded.