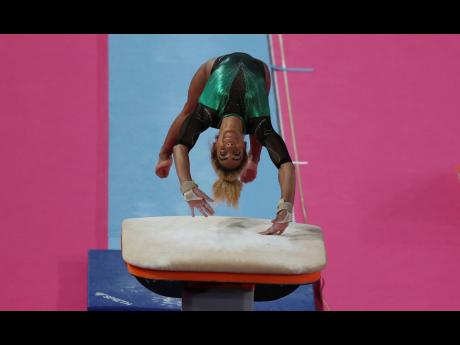 Danusia Francis’ qualification for Tokyo 2020 is a tremendous boost not only for the 25-year-old but also gymnastics in Jamaica and the Caribbean. In my column on October 5, I suggested that ‘Nush,’ as she is called, was the one to watch. My comments were based on her performances coming out of the Pan-Am Games in Lima, Peru. I sensed that she was steadily gaining confidence under the guidance of Vincent Malduck.

Nush’s road to Olympic qualification and becoming only the second Jamaican, behind Toni-Ann Williams, to do so, hasn’t been the easiest. The University of California, Los Angeles (UCLA) , alum has had a tough journey, and to finally qualify for an Olympics at this stage is testament to her hard work. She describes this as a great feeling that means everything to her. She believed in herself but it wasn’t always easy.

“I had to overcome obstacles and self-doubt at times, and I am so happy I have persevered. It has been a long and fulfilling journey,” she said.

That road included being a reserve for Great Britain at London 2012; not making the Jamaica team for Rio 2016; and not getting a spot on the Jamaica team to the 2018 Commonwealth Games. She has been a consummate professional and credits her coaches for guiding her to this stage, including her first gymnastics club at UCLA to her current Heathrow Gymnastics club. Francis believes that even though it has been a long and difficult journey, she is now physically and mentally in the best shape to compete on the Olympic stage.

Francis, who started competing at age five, is inspired by gymnast Nastia Liukin. As an elegant and flamboyant gymnast herself, you can also understand why she is also a big fan of Usain Bolt. She sees them both as competitors who “competed with such charisma”. If you have ever watched her compete, you can see why she favours the beam, considering it her best, yet a very nerve-racking event during competition. Francis is also considered a performer and that shows on the floor exercise.

Danusia Francis is now discussed across the length and breadth of Jamaica and in the gymnastics circles. She is now experiencing a different level of stardom, which I truly believe she deserves.

We must use this opportunity to shine light on the work of the Jamaica Amateur Gymnastics Association under the guidance of president Nicole Grant-Brown. Additionally, the diaspora support has been good in helping to manage the travel arrangements and other needs of members representing Jamaica at the various competitions.

I want to also spare a thought for Reiss Beckford, whom I think has been putting in a lot of hard work to make it to Tokyo 2020. Hopefully, she continues to work hard and use Nush’s success as reason to continue.

Many athletes don’t plan for life after they have retired, but it seems Francis isn’t one of them. Although she’s undecided about the date when she will dismount for the last time, she has already started post-retirement planning. She disclosed that she is currently working as a stunt double for a Netflix series, and she hopes to continue in this vein in the future.

She wants to inspire ‘the next generation of gymnasts,’ and has indicated a desire to coach more in Jamaica as well. I hope she, Toni-Ann Williams, and the other competitors can host camps locally to inspire youngsters who dream of becoming the next Olympians.

When I asked her what she would want to be remembered for, Francis said, “I want people to remember my unique style of gymnastics and to be remembered for pushing the boundaries of innovation in the sport.” She also hopes that through her success, our little country will believe more in our gymnastics talent both locally and overseas, and she vows to “try improve upon our results in the hope that the younger generation of gymnasts continue the pattern and one day we have a Jamaican gymnastics Olympic champion! That will be a proud day”.

As usual, I hope we can keep supporting our gymnastics programme by getting to know the work of the association and contributing however possible. We have the talent. Now it is time to nurture that talent.

All the best, Danusia!

Dalton Myers is a sports consultant and host of The Drive Phase Podcast. Send feedback to daltonsmyers@gmail.com or tweet @daltonsmyers