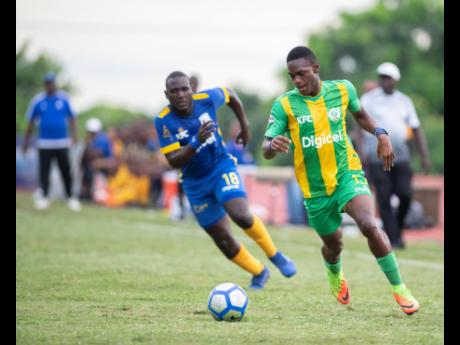 Defending champions Kingston College (KC) will be aiming to finish the job against Vauxhall High when both teams clash in their ISSA/Digicel Manning Cup second-leg match at Winchester Park today at 3 p.m. In the opening match of the double-header at 1 p.m., former champions Wolmer’s will take a 1-0 advantage into their return game against St Catherine High School.

The Alex Thomas-coached Wolmer’s netted their all-important goal through a strike from Deshawn Bernard. St Catherine will be hoping for improved performance in front of goal after their attackers were guilty of missing a number of clear-cut chances in the opening match.

The Ludlow Bernard-coached KC are once again expected to get the better of their opponents and advance to the quarterfinals of the competition. They will be depending heavily on Dwayne Atkinson; Jamari Morrison, who scored in their first-leg victory; Ronaldo Robinson; and Rajiv Gavin to lead their charge to victory.

Vauxhall, who took a surprise lead against KC in the first leg but faded in the latter stages of the match, will be hoping for a much improved performance against their opponents this afternoon. Kemar Britton was the scorer for Vauxhall.

Meanwhile, the Ashenheim Stadium at Jamaica College (JC) will host a double-header of ­second-round second-leg games when Camperdown face Holy Trinity at 1 p.m. with the aggregate score at 0-0. St Andrew Technical High will entertain Eltham High with that tie level at 2-2.

In the two games set for the Spanish Town Prison Oval (STPO), St George’s College take a 2-1 lead into their return contest against Mona at 3 p.m.

In the opening match at 1 p.m., Jonathan Grant face Excelsior High, who hold a 3-0 aggregate lead.

The Stadium East double-header sees JC play Hydel at 2 p.m. then Charlie Smith face off against St Jago at 4 p.m. Both of these matches are actually second legs being played before the first legs, as those previous encounters were rained out at the STPO. Jago and Charlie Smith managed 13 goal-less minutes of their game before the shower started while the JC-Hydel match was unable to start afterwards because of a waterlogged field.