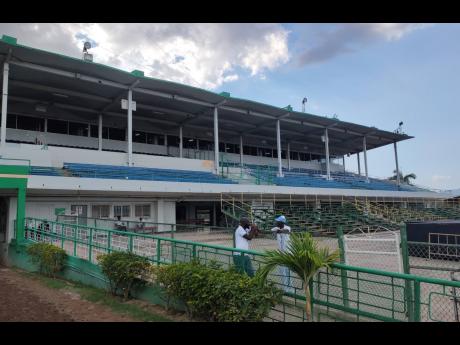 Ainsley Walters
Empty grandstand on Tuesday, March 17, as horse racing was held at Caymanas Park without spectators due to concerns over the coronavirus disease. Racing has since been suspended indefinitely due to the disease.

With no opportunity to earn due to the recent closure of Caymanas Park due to the coronavirus disease, president of the United Racehorse Trainers Association (URTA), Ryan Darby, underlined that it is still costing owners and trainers over $20 million per week collectively, to maintain their operations.

Horse-racing promoters Supreme Ventures Racing and Entertainment Limited (SVREL) closed operations at the facility indefinitely after Saturday’s race day was held without spectators, as a means of containing the spread of the virus, which has so far seen 21 confirmed cases and one death in Jamaica.

Races were also held on the 17th without fans and Darby believes that this is a good compromise, as it provides an opportunity for stakeholders to earn.

The Betting, Gaming and Lotteries Commission (BGLC), the local regulators of the horse-racing industry, also issued a notice on March 17, closing operations at all gaming lounges, betting shops and bars with gambling machines, effectively shutting down the off track betting (OTB) network.

“It is very negative for us because unless it becomes a 100 per cent necessity, then racing should go on,” Darby lamented.

“It is not only affecting the grooms, trainers, owners and track, but it is affecting the OTBs staff members and so it is an economic disaster because it takes an estimated $20 million to keep the product going for a week,” he said. “This money comes out of the pocket of the owners and trainers and not from Supreme Ventures. It takes a lot of money to prepare these horses, pay the grooms, pay the grass man, pay the sawdust man, pay the feed bill and you also have to pay the vets to look after the horses as well.”

The veteran trainer said that the promoting company along the BGLC should considered having the races behind closed door like they did on March 17 and 21, respectively.

“I think we should continue to have racing behind closed doors at Caymanas Park, but we just need to manage the crowd at some of these OTBs in regard to the guidelines that the Government have set out,” Darby argued.

Meanwhile, Chairman of SVREL Solomon Sharpe, while not giving figure, said his company will also suffer major losses in revenue due to the closure of the racetrack.

“I am not at liberty to tell you the numbers, but what I can tell you is that it would be significant losses and regardless of race days or no race days because we have to keep the racetrack operations open,” said Sharpe.

Approximately 1,500 horses are currently housed in stables at Caymanas Park.