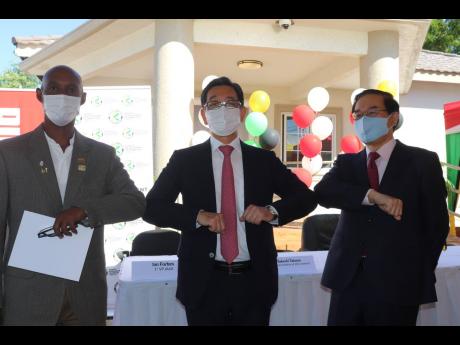 Jamaica Athletic Administrative Association (JAAA) President Garth Gayle says that it is committed to supporting schools in need of athletics equipment for their respective programmes.

Gayle was speaking at the handover ceremony of land hurdle equipment from the Tottori Athletics Association (TAA) in Japan at JAAA headquarters in Kingston yesterday. The equipment will be distributed to five high schools and two primary schools.

“It will go a long way in assisting these schools in preparing hurdlers, and I’m sure in another four or five years, from this kind of contribution, that another top Olympian will come from one of these schools,” Gayle told The Gleaner.

ISSA President Keith Wellington commends the move to support athletic programmes who operate at a disadvantage.

“Students’ development depends heavily on the resources available at the schools,” he said. “If you note, the hurdles were shared with schools who have less resources than some of the top schools.

“I think by sharing these resources among the less fortunate, if I may call them that, it gives us a great opportunity to discover talents that may otherwise go undiscovered.”

Noting the long-standing relationship between Jamaica and Japan, Sports Minister Olivia Grange said that the presentation was another sign of cooperation in a partnership which started in 2007 when Jamaica participated at the 2007 World Athletics Championships in Osaka, Japan.

“The handing over of these land hurdles to the JAAA again signals the goodwill towards our people even as we prepare to be hosted by the prefecture (province) of Tottori for the Tokyo Olympics and Paralympic Games to be held next year,” she said. “The Jamaican delegation is expected to spend two weeks in the prefecture before the Olympic Village officially opens in Tokyo. The games were postponed until July 2021 because of the COVID-19 pandemic.

Among those conveying greetings were Japan Ambassador to Jamaica Masaya Fujiwara and Japan International Cooperation Agency representative Takeshi Takano, who brought a message on behalf of TAA Chairman Shinichi Hamasaki. In his message, Hamasaki said that he is proud that young local talent will be able to benefit from the equipment.

“Today marks the third donation of hurdles from Tottori to Jamaica, and it is a joy knowing that the main beneficiaries of hurdles to date have been Jamaican high schools,” the statement said. “It is my dream to see more of your promising athletic youth training with these hurdles, participating in track and field, and in the near future, I would hope to see these athletes active on the world stage.”