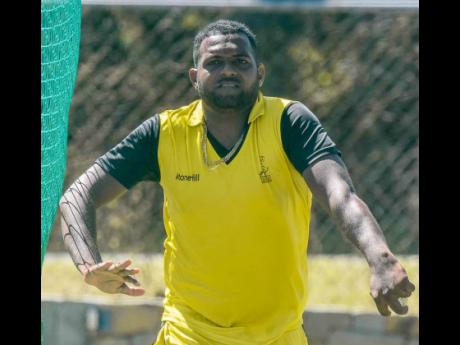 The Jamaica Scorpions will bow into action in the 2020 Regional Super50 Cup, when they square off with the Trinidad and Tobago Red Force at the Sir Vivian Richards Stadium in Antigua today, starting at 8 a.m. Jamaica time. The Andre Coley-coached...

The Jamaica Scorpions will bow into action in the 2020 Regional Super50 Cup, when they square off with the Trinidad and Tobago Red Force at the Sir Vivian Richards Stadium in Antigua today, starting at 8 a.m. Jamaica time.

The Andre Coley-coached Scorpions have been going through their paces as a full squad since arriving in Antigua, following intermittent small group training ahead of their departure from Jamaica.

Left-arm slow bowler Dennis Bulli, who is expected to play a major role in the bowling department, says the team has been gelling well since coming together, and the unit is revved up to get their first taste of action at the tournament.

“We are ready. We have been practising really hard and we have been having our team meetings via Zoom where we talk about our plans, so it’s just for us to execute now,” said Bulli.

The former Kensington and JDF player says there is a nice vibe that has developed in the Jamaica camp, with the experienced veterans such as Sheldon Cottrell, Derval Green and Andre McCarthy blending nicely with the young players such as Romaine Morris, Javelle Glenn and Jeavor Royal.

The Scorpions will have their work cut out against a well-stacked T&T team, led by West Indies white-ball captain Kieron Pollard.

For Bulli, the Jamaicans will focus on playing their brand of cricket, despite the firepower and experience they will come up against in the Red Force team.

“We are aiming to play simple cricket. We are not going to play any name; we just want to go out and have some fun and play our brand of cricket and just execute,” said Bulli.

The Red Force, who will be seeking a record-extending 13th regional 50-overs title, will count on the likes of vice-captain Darren Bravo, Evin Lewis, Lendl Simmons, Jason Mohammed, Nicholas Pooran, Sunil Narine and Denesh Ramdin, who have all represented the West Indies at the international level.

Having not hosted any cricket for some time due to the global pandemic, there is a lot of unpredictability surrounding the playing surface at the Sir Vivian Richards Stadium. With that said, Bulli believes the wicket is expected to provide some runs, and so execution from the bowlers will be key.

“We have to stay tight as bowlers, for one, and be positive because the wickets look more batting-friendly. I haven’t seen a great deal of spin yet, so variations for us spinners are important,” added Bulli.