High Prevalence of Glaucoma a cause of concern 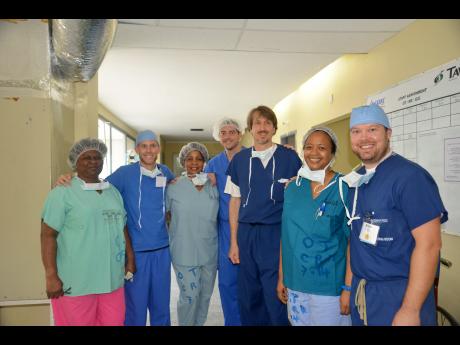 Dr Daniel Brown, head of delegation of United States-based I-Care Group Medical Mission, has expressed concern over the number of cases of glaucoma and cataract the group encountered in just one week in Jamaica.

Brown, an ophthalmologist, led a 41-member team of medical and non-medical personnel in a free clinic at the Mafoota community in St James from October 13 to 17.

A five-member group of ophthalmologists from the team, which is an affiliate of Great Shapes Incorporated, also performed cataract surgeries at the Cornwall Regional Hospital over the period.

"I think every Jamaican should have an eye exam looking for glaucoma because it is so prevalent here on the island in an aggressive form. I have seen more blindness in one week in Jamaica than I see in 10 years in the United States. I see people in their teens here, blinded from glaucoma," Brown said.

"Everybody should have their pressure checked and optic nerve looked at to see if they have diabetes. It is crucial to keep the diabetes controlled and have annual eye exams. Don't smoke and be moderate when consuming alcohol, and more people should wear sunglasses with ultra violet ray protection," Brown recommended.

He also mentioned that it was necessary for people to wear safety glasses as the team had seen many cases of eye trauma.

"I have seen a lot of one-eyed Jamaicans because they have had trauma to the other eye," he said.

Dr Claudine Green-Hemmings, consultant ophthalmologist at the Cornwall Regional Hospital, said she was happy for the assistance from the I-Care team - which conducted 33 cataract surgeries in one week which has assisted greatly in clearing the backlog of cases that the hospital has to deal with.

"In a week, we would have done about six cataract surgeries, but with this team we have now done close to 40 surgeries, which has been excellent. We greatly appreciate Dr Brown and his team from I-Care because they have volunteered their time and energies to restore sight and light to these very worthy individuals," Green-Hemmings said.

Great Shape! Inc - iCare has been serving Jamaicans since 1988 and for the sixth consecutive year has enlisted the support of ophthalmologists, optometrists, opticians, optical technicians, nurses, and non-eye care professional volunteers from the United States and Canada to participate in the weeklong clinic made possible through partnerships with the Sandals Foundation, VOSH International, Lions Clubs, SEE International, Alcon, and Seaboard Marine.