Mixed views on crime-fighting in Hanover - some residents not impressed 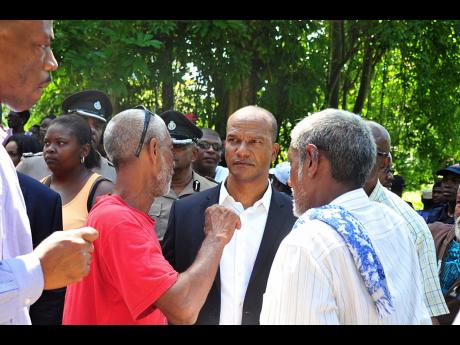 Adrian Frater
National Security Minister Peter Bunting listening to the concerns of residents in Logwood, Hanover, in the aftermath of the grusome killing of six family members by gunmen.

Residents of Hanover are expressing mixed views about the impact of the Ministry of National Security's latest crime-fighting initiatives, which include the 'Get the Guns Campaign' and the deployment of soldiers on the streets of western Jamaica.

For Dwayne Clayton, the chairman of the Lucea West Community Development Committee, the presence of the soldiers in Hanover has had a positive impact as there have been no reported shootings since they arrived in the parish.

"Without the deployment of the soldiers, it would not have stabilised. The criminals seem to have more fear for the soldiers," said Clayton, who expressed delight at seeing the soldiers patrolling in the mornings and in the evenings. "As far as the police are concerned, they (the criminals) have no regard for them."

Earlier this month, Bunting announced a new initiative to fight crime nationally. The initiative included the 'Get the Guns Campaign' and the deployment of members of the Jamaica Defence Force to crime hotspots in the western parishes of Hanover, Westmoreland, and St James.

While commending the soldiers for maintaining what he said was now a 'calm' Hanover, Leonard Sharpe, the vice-president of the Hanover Parish Development Committee, was highly critical of the policing strategies, which he said were non-tactical.

"The plan they (Ministry of National Security) have now is working because the people respect the soldiers. As for the police, people don't respect them... . They do anything in front of them and they can't say anything to them," said Sharpe. "The soldiers are not into that. They come to fight crime... . The soldiers are more efficient... . The people have more trust in the soldier because you can say things to them and dem don't go tell 'John Brown' seh you seh.

"The soldiers, you see them day and night; the police, you don't see them neither day nor night. Fi dem type of plan not working because each time they go in an area to do search, they have on their flashing lights, continued Sharpe. "If I am a criminal and from a distance I see the flashing light, I will know it is a police vehicle and move away."

Unlike other stakeholders in the parish, Donald Campbell, president of the Riverside Farmers Group, has given the new initiatives a failing grade.

"They have soldiers driving up and down all over the place and the gunmen still have the guns. They are not solving any crimes, not capturing any gunmen, and not finding any guns, said Campbell. "Cordon and search are not going on down here and no curfews. This is how you are going to get the guns. No man not going walk up to you and hand you a gun.

"When the military leave, the guns will still be here ... . At first, the people got a little fear, but right now they get used to seeing them. So they (criminals) might not be coming out and doing robberies on a large scale, but robberies still going on," added Campbell. "They robbed someone on West Avenue in Lucea last week and the soldiers were patrolling on East Avenue, which was just a stone's throw away.

For Campbell to buy into the latest initiative, he first wants to see curfews in Dias, Kingsvale, Lucea, Johnson Town, Barbary Hill, Brissett, Kew, Malcolm Heights and St Simon, the communities that have witnessed murders in recent times.