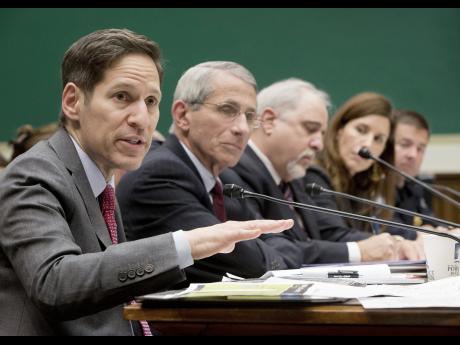 Centers for Disease Control and Prevention (CDC), Director Dr. Tom Frieden, far left, testifies as he sits on a panel with, from second from left,, Dr. Anthony Fauci, director of The National Institute of Allergy and Infectious Diseases, Dr. Robin Robinson, director of the Biomedical Advanced Research and Development Authority at the U.S. Department of Health and Human Service, Dr. Luciana Borio, assistant commissioner for counterterrorism policy at the U.S. Food and Drug Administration and John Wagner, the Acting assistant Commissioner at the Office of Field Operations for U.S. Customs and Border Protection, testify on Capitol Hill in Washington, last Thursday, before the House Energy and Commerce Committee's subcommittee on Oversight and Investigations hearing to examine the government's response to contain the disease and whether America's hospitals and health care workers are adequately prepared for Ebola patients. (AP Photo/Pablo Martinez Monsivais)

Revised guidance for health-care workers treating Ebola patients will include using protective gear "with no skin showing", a top federal health official said yesterday, and the Pentagon announced it was forming a team to assist medical staff in the United States, if needed.

Dr Anthony Fauci, head of the National Institute of Allergy and Infectious Diseases, said those caring for an Ebola patient in Dallas, Texas were left vulnerable because some of their skin was exposed.

The Centers for Disease Control and Prevention is working on revisions to safety protocols. Earlier ones, he said, were based on a World Health Organization model in which care was given in more remote places, often

outdoors, and without intensive training for health workers.

"So there were parts about that protocol that left vulnerability, parts of the skin that were open," Fauci said.

"Very clearly, when you go into a hospital, you have to intubate somebody, have all of the body fluids, you've got to be completely covered. So that's going to be one of the things ... to be complete covering with no skin showing whatsoever," he said.

On Sunday, the Pentagon announced that Defense Secretary Chuck Hagel had ordered the formation of a 30-person support team from across the services to assist civilian medical professionals in the US if needed to treat Ebola. So far, three cases have been confirmed in the US.

personal protective equipment at Fort Sam Houston in San Antonio, Texas, then remain in "prepare to deploy" status for 30 days.

The team would not be sent to West Africa or other overseas locations, and would "be called upon domestically only if deemed prudent by our public health professionals", Pentagon press secretary Rear Admiral John Kirby said in a statement.

Ebola's incubation period is 21 days, and Fauci noted that mark was being reached Sunday for Texas Health Presbyterian Hospital workers who first treated Thomas Eric Duncan, the Liberian man who later died of the disease.

"The ones now today that are going to be 'off the hook' are the ones who saw him initially in the emergency room," said Fauci, representing the Obama administration as he appeared on five Sunday news shows.

Duncan was seen at the hospital on September 26 and sent home with antibiotics. He returned by ambulance on September 28, was admitted and died of Ebola on October 8.

"That's going to be a good thing for those families. They've been through so much, and we're very happy about that," Jenkins said.

But, Jenkins continued, "At the same time, we're extremely concerned about these health care workers and we continue to make contingency in the event that there are more cases."

Jenkins called the 75 health workers who cared for Duncan "hometown health-care heroes", and said they had signed agreements with the state's public health commissioner to stay off public transportation.

He said if any other health workers test positive for Ebola, a plan is in place that includes:

n all intake will be done at Texas Health Presbyterian Hospital.

n ambulances have been instructed to bring anyone with a history of West Africa travel and a fever to that hospital.

n those found to be infected will be transferred by air ambulance to one of three national health centers set up to handle very risky germs, or by ground ambulance to the University of Texas Medical Branch at Galveston, which has the capability of disposing of the "copious waste" that Ebola cases generate.

n If a large number of cases surface, a triage unit at another, undisclosed location will be set up in the next 24 hours, with isolation units. The location was to be announced last night.