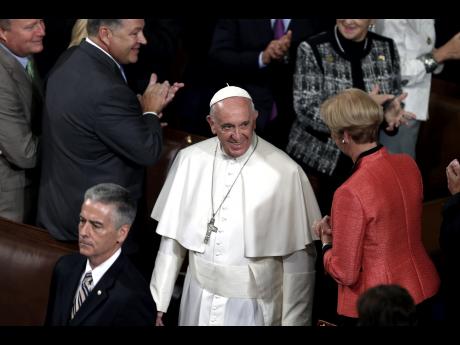 AP
Pope Francis smiles as he walks into the House chamber on Capitol Hill in Washington, yesterday, before addressing a joint meeting of Congress. 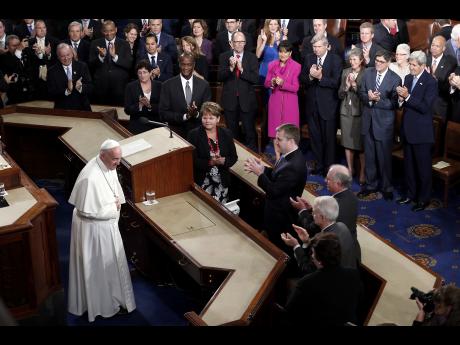 AP
Pope Francis acknowledges applause during his address to a joint meeting of Congress on Capitol Hill in Washington, yesterday.
1
2

Standing before a rapt Congress, Pope Francis issued a ringing call to action on behalf of immigrants yesterday, urging lawmakers to embrace "the stranger in our midst" as he became the first pontiff in history to address a joint meeting of the legislators.

Referencing the migration crisis in Europe as well as the United States' own struggle with immigration from Latin America, Francis summoned lawmakers "to respond in a way which is always humane, just and fraternal".

"We must not be taken aback by their numbers, but rather view them as persons, seeing their faces and listening to their stories, trying to respond as best as we can to their situation," Francis urged.

He was welcomed enthusiastically to a House chamber packed with Supreme Court justices, Cabinet officials, and lawmakers of both parties, uniting the bickering factions before he even opened his mouth as all stood to cheer his arrival. The sergeant at arms intoned "Mr Speaker, the Pope of the Holy See," and Francis made his way up the centre aisle in his white robes, moving slowly as lawmakers applauded, some inclining their heads in bows.

After the speech, he appeared on a Capitol balcony and briefly addressed a cheering crowd of thousands below on the lawn and the Mall beyond.

"Buenos dias," he called out, and the crowd thundered its response. "God bless America!" he concluded, as he had in the House chamber.

Thursday's speech was the latest highlight for the Pope's whirlwind three-day visit to Washington, the first stop on a three-city US tour.