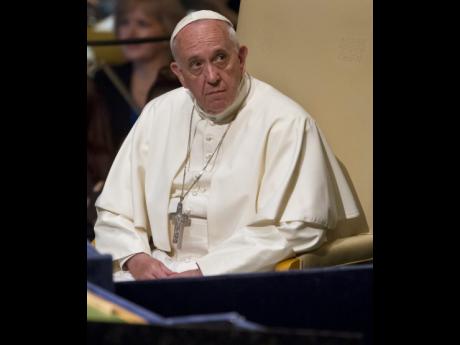 PHILADELPHIA (AP) — Pope Francis met with victims of child sexual abuse Sunday on the final day of his U.S. visit and promised to hold accountable those responsible for the scandal in the church, delivering a powerful warning to American bishops accused of covering up for paedophilic priests instead of reporting them to police.

The pontiff disclosed the gesture of reconciliation at the start of a meeting with American bishops gathered in Philadelphia for a big rally on Catholic families.

But in a move that signalled a new effort by the church to redirect the discussion, the Vatican said not all five of the victims were abused by members of the clergy; some of the three women and two men had been victimised by family members or educators.

Francis praised the survivors as "true heralds of mercy" who deserve the church's gratitude for helping to bring the truth to light.

"God weeps, for the sexual abuse of children cannot be maintained in secret, and I commit to a careful oversight to ensure that youth are protected and that all responsible will be held accountable," Francis said in Spanish.

The pope has agreed to create a new Vatican tribunal to prosecute bishops who failed to protect their flock, and he has accepted the resignations of three U.S. bishops accused of mishandling cases.

He previously vowed to hold bishops accountable during his first-ever meeting with victims, held last summer at the Vatican.

But Francis and U.S. bishops have also argued that child molestation is a serious problem beyond the church, especially within families and in schools. The meeting with victims abused by people other than priests underscored that point.

Later Sunday, Francis visited a Philadelphia jail to give hope and encouragement to about 100 inmates, included suspected killers, rapists and mobsters. Late in the afternoon, he was scheduled to celebrate a final Mass on U.S. soil on Philadelphia's grandest boulevard, the Benjamin Franklin Parkway, with organiser's predicting a crowd of 1 million.

The Archdiocese of Philadelphia has been hit hard by the sexual abuse scandal and has been the subject of repeated grand jury investigations, including one that accused it keeping on assignment more than three dozen priests facing serious accusations. A monsignor was found guilty of endangering children by not removing paedophilic priests, becoming the first American church official convicted of such an offence.

Victims' groups had complained earlier in the week that Francis neglected to address their plight when he congratulated bishops for their "courageous" and generous response to the scandal. Sunday's meeting took place a day after the pope celebrated Mass with Justin Rigali, the cardinal who was archbishop in Philadelphia when the archdiocese was accused of sheltering paedophiles.

The Rev. Tom Doyle, a canon lawyer who worked at the Vatican embassy in Washington and is now an advocate for victims, said that including more than just victims of abusive clergy "seriously minimises" the problem in the church.

"We don't think we're going to get any real support to change this from the leadership in the Vatican," Doyle said in a phone interview. "They're having this big meeting of families. But there's been no real room for all the families that the Catholic Church has destroyed through sexual abuse."

The main victims' support group, SNAP, dismissed the meeting as an exercise in public relations.

"Is a child anywhere on Earth safer now that a pope, for maybe the seventh or eighth time or ninth time, has briefly chatted with abuse victims? No," said SNAP's David Clohessy.

The Vatican spokesman, the Rev. Federico Lombardi, said the pope met with the survivors for a half-hour at the San Carlo Borromeo seminary. He said the pope prayed with them, listened to their stories and expressed his closeness in their suffering and his "pain and shame" in the case of those abused by priests.

In his meeting with the bishops, Francis referred to gay marriage for the first time in his U.S. trip, lamenting the new reality in which Christians must live. But he also urged American bishops to redirect their energies away from complaining about it, saying a church that only explains its doctrine is "dangerously unbalanced."

"I would even say that it is stuck in a vicious circle," he said.

The U.S. bishops have called the legalisation of gay marriage by the U.S. Supreme Court three months ago "a tragic error" and "profoundly immoral and unjust."

Hours before Sunday's Mass, Roman Catholics from across the country and around the world began trekking into the city, crossing bridges on foot and packing subway cars.

But there were fears that the extraordinary security — including airport-style bag searches, crowd-control cattle chutes and blocked-off streets — would scare many people away and result in a turnout far below organiser's' expectations.

Thomas Coorey, a dentist and father of four visiting Philadelphia from Sydney, called Francis "the most inspirational and amazing pope that could breathe life into this church of mine. And I'm so grateful to have a leader like him who's so humble and such a true servant of God."

It has been a common sentiment throughout the pope's visit to Washington, New York and Philadelphia.

"It's the wave. It's the smile," said Tom Hambrose, 52, of Haddon Heights, New Jersey. "It's what he's articulating, that the church needs to step forward and needs to change its thinking about things."