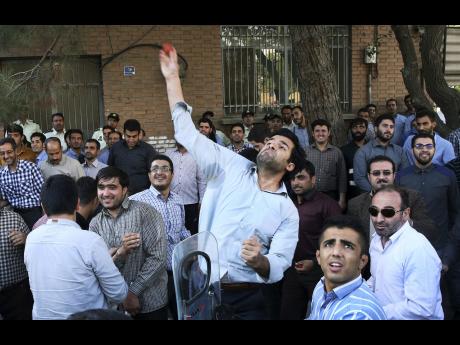 AP
An Iranian protester throws a tomato at the Saudi Arabia's Embassy in Tehran, Iran, on Sunday, during a gathering to blame the Arab country for a deadly stampede on Thursday that killed more than 700 pilgrims. 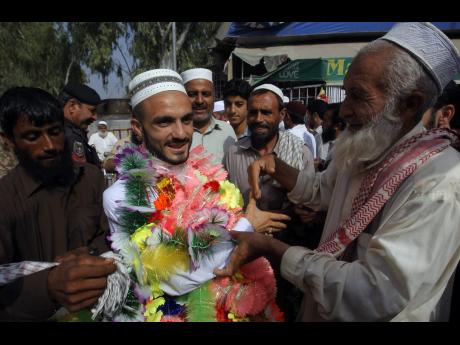 AP
A Pakistani man, centre left, is greeted by relatives on his arrival from Saudi Arabia after performing the Muslim hajj pilgrimage, yesterday.
1
2

Saudi Arabia has given foreign diplomats some 1,100 photographs of the dead from last week's hajj crush and stampede, Indian and Pakistani authorities said, an indication of a significantly higher death toll than previously offered by the kingdom.

Saudi officials could not be immediately reached for comment last night about the discrepancy in the toll of the disaster in Mina. The Saudi Health Ministry's latest figures, released Saturday, put the toll at 769 people killed and 934 injured.

Tariq Fazal Chaudhry, a lawmaker in Pakistan's governing PML-N political party who is leading his country's response to the disaster, said Saudi officials gave diplomats "1,100 photos" of the dead from Mina. Chaudhry told journalists during a news conference broadcast nationwide last night that the photos could be viewed at Saudi embassies and missions abroad.

"This is the official figure of martyrs from Saudi officials, given for the identification process," Chaudhry said.

His comments echoed those of Indian External Affairs Minister Sushma Swaraj from Sunday.

"Saudi authorities have released photos of 1,090 pilgrims who have died in (the hajj) stampede," Swaraj wrote on Twitter.

Indian diplomats and government officials declined to immediately discuss or elaborate on Swaraj's tweet yesterday. It wasn't immediately clear if other foreign embassies in Saudi Arabia had been given similar photographs.

Saudi authorities have said that the disaster began when two large waves of pilgrims converged on a narrow road last Thursday during the final days of the annual hajj in Mina near the holy city of Mecca. Survivors say the crowding caused people to suffocate and eventually trample one another in the worst disaster to befall the annual pilgrimage in a quarter-century.

Iran, Saudi Arabia's regional Shiite arch-rival, has criticised the kingdom over the hajj disaster, and daily protests have taken place near the Saudi Embassy in Tehran. Iranian state media also have suggested that the death toll in the disaster was far higher, without providing any corroboration.

Later Monday, the death toll for Iran in the disaster rose to 228 pilgrims killed, Iranian state television reported. Speaking before the UN General Assembly in New York, Iranian President Hassan Rouhani said his nation was mourning the loss of "hundreds of its citizens" and blamed the hajj stampede on the "incompetence and mismanagement of those in charge".