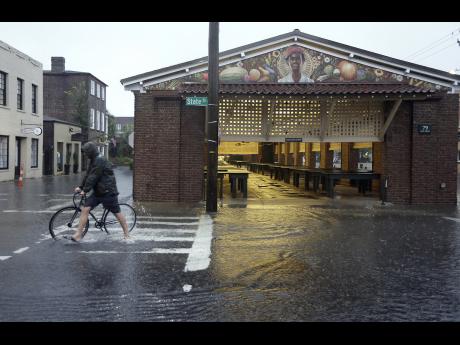 AP
A man walks his bicycle through high water at the City Market in downtown Charleston, South Carolina yesterday.

Unrelenting rain across the United States East Coast showed little sign of letup yesterday, with record-setting precipitation expected to prolong the soppy misery that has been eased only by news that Hurricane Joaquin is no longer a threat.

A flash flood warning was in effect in parts of South Carolina, where authorities shut down the Charleston peninsula to motorists.

Several feet of water had caused vehicles to stall in downtown Charleston and water has inundated some homes and buildings in the area.

The Charleston Police Department issued lists of dozens of street closings, and the city's historic district was almost entirely shut down. Parts of the market area had sandbags piled up to keep the flood waters out.

Portions of some streets were flooded, with water roughly eight to 12 inches (20 to 30 centimetres) deep, reaching the wheel wells of cars in some spots.

Elsewhere, coastal flooding remained a threat - particularly in the Virginia Beach area and the Outer Banks of North Carolina.

The weather service issued a warning for residents living along the coast to be alert for rising water. A combination of high water and high waves could result in beach erosion and damage to docks and piers.