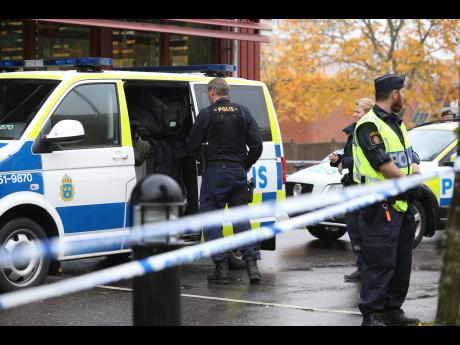 AP
A crowd gathers outside, as emergency services attend the scene of a sword attack by a masked man at the Kronan school in Trollhattan, Sweden, yesterday. At least six people were injured, and the offender was shot by the police.

A knife-wielding masked man attacked people yesterday at a school in southern Sweden, killing one teacher and wounding two students and another teacher before being shot by police, authorities said.

Students fled in the morning from the Kronan school in Trollhattan, near Gothenburg, Sweden's second-largest city. Police in Trollhattan in a statement said the attack took place in the school's cafe area.

Another police spokesman, Stefan Gustavsson, told the AP that the attacker had a large knife, possibly two, including what may have been a sword. He said authorities knew the attacker had killed the teacher "because of the wounds he had".

Fuxborg said police fired two shots, one of which hit the attacker, a man in his 20s.

Police did not give any possible reason for the attack.

Health authorities in Trollhattan said the two students, aged 11 and 15, were seriously wounded with cuts. They said the attacker was also in serious condition. There was no immediate information on the condition of the wounded male teacher.

The school has 400 students, ranging from pre-school to high school. Fuxborg could not say whether the man had any connection with the school.