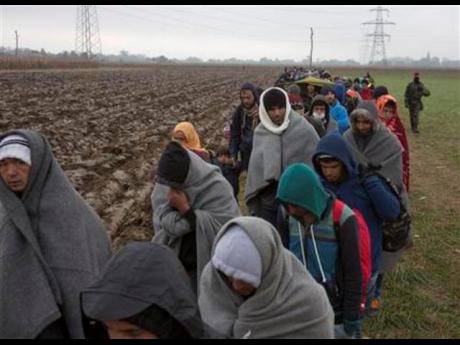 AP photo
Migrants make their way through a field after crossing from Croatia, in Rigonce, Slovenia, Sunday, Oct. 25.

BRUSSELS (AP) -- As thousands of Syrians, Afghans and others kept up their relentless march through the Balkans, European leaders held an emergency summit Sunday to find ways of easing the plight of those caught up in the continent's greatest immigration crisis in decades.

In a draft of the meeting's conclusions seen by The Associated Press, the leaders were looking to shore up Greece's porous border with Turkey and slow the flow of people heading north toward the European Union's heartland.

"Extraordinary times demand extraordinary measures," German Chancellor Angela Merkel said of the summit called on short notice that brought 11 leaders from the EU and the Balkans to Brussels.

Serbian Prime Minister Aleksandar Vucic said he was prepared for "hard, not very pleasant" talks, but hoped the leaders could work out a "comprehensive solution." He said Serbia would not "put up any walls" - unlike Hungary's new razor wire-topped border fences - but suggested his country will not agree to host tens of thousands of stranded refugees if countries further west closed their borders.

Other Balkan officials say the 28-nation EU needs to get control of the migrant flow at the bloc's external border between EU-member Greece and Turkey. Migration experts, however, say the flood of refugees won't be halted until the world resolves the war in Syria, which is driving millions out of the country.

Nearly 250,000 migrants have passed through the Balkans since mid-September and the surge is not being deterred by either cold weather or colder waters off Greece. Croatia said 11,500 people crossed into the country on Saturday, the highest in a single day since asylum-seekers were blocked by Hungary and started coming into Croatia in mid-September.

At Slovenia's overwhelmed Brezice refugee camp near the border with Croatia, a spokesman for the U.N. refugee agency urged leaders to come up with a system to register and screen newcomers when they first enter Europe, rather than in piecemeal attempts at borders along the way.

"But also very important is to help Syria's neighbouring countries, where there are around 4 million refugees," said UNHCR spokesman Babar Baloch. "These people don't need to take these risky journeys if there are legal pathways to come to Europe."

The leaders of EU members Austria, Bulgaria, Croatia, Germany, Greece, Hungary, Romania and Slovenia have been invited to the Brussels summit, along with two non-members, Macedonia and Serbia.

A draft plan that they were to discuss has already drawn criticism for proposing that countries stop allowing asylum-seekers to pass across their borders without consulting with their neighbours. Croatian Prime Minister Zoran Milanovic has already declared that such consultation "is impossible."

Migrants turned to Croatia after Hungary erected a barbed-wire fence along its border with Serbia. They now mainly travel across the water from Turkey to Greece, and then north to Macedonia and Serbia before entering Croatia and moving on to Slovenia and Austria. Most are aiming to get to Germany or Scandinavia.

Mahmoud Awad, a UNHCR field protection officer working, said about 1,000 people passed through Serbia's border town of Berkasovo and into Croatia overnight. Awad said many buses were on hand to help transport people and that everything has been "smooth and calm."

Syrian refugee Mohamed Alabdulameed was one of many forging into Slovenia after nearly three weeks on the road. The 28-year-old said he was initially aiming to make it to Britain but was making new plans after hearing how dangerous it had become to try and get across the English Channel. More than a dozen migrants have been killed in the last few months trying to hitchhike on trains or trucks going through the Channel Tunnel.

"I am asking myself 'Why do they close the doors in front of us, especially the educated people who studied their language in other countries?,'" he said. "That's why I am really surprised and astonished at the same time."

In the Austrian border town of Spielfeld, police said 2,500 asylum-seekers spent the night in tents and 7,000 more were expected to come in Sunday from Slovenia, the dpa news agency reported. In Germany's southernmost state of Bavaria, authorities said the flow of asylum-seekers from Austria kept steady at 3,000 to 6,000 people per day.