Carson talks about being Seventh-day Adventist 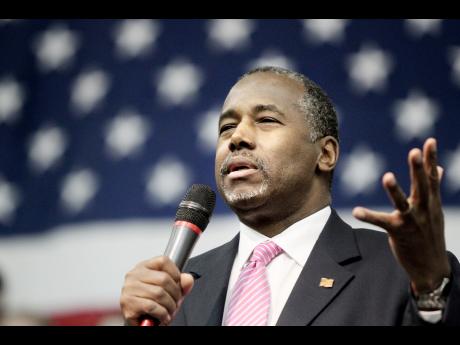 As his surge in heavily evangelical Iowa puts a spotlight on his faith, Republican presidential candidate Ben Carson is opening up about his membership in the Seventh-day Adventist Church.

He embraces it as right for him, while also framing his beliefs in broad terms that aim to transcend divisions among Christians.

In an interview with The Associated Press, days after GOP rival Donald Trump criticized Carson's church, the retired neurosurgeon said his relationship with God was "the most important aspect. It's not really denomination specific".

Carson discussed a brief period as a college student when he questioned whether to stay in the church. And in his own criticism, he said it was a "huge mistake" that the top Adventist policymaking body recently voted against ordaining women.

"I don't see any reason why women can't be ordained," he said.

The remarks from the Republican presidential candidate were his most expansive about his church since he joined the 2016 contest.

Voters have come to know him for his faith-infused policy stands, including his opposition to abortion and gay marriage, without hearing much from him about his Adventism.

The church, formed in 1863 in Battle Creek, Michigan, has a spiritual focus on healthy living and an extensive network of hospitals and medical clinics. Carson expressed pride in the denomination, while also trying to reach beyond it.

"There are a lot of people who have a close relationship with God, and you can generally tell who they are by the way they act, the way they treat other people," he said Wednesday a few hours before the GOP debate.

Carson is accustomed to misunderstandings about his church.

"A lot of people would ascribe any weird thing they heard about anybody - they'd say, 'That's the Adventists,'" he said.

His mother was an Adventist, and he was baptized into the church twice at his own request, because he felt he was too young the first time to grasp the significance.

He has served as an elder, a religious teacher and as a star representative of the denomination around the world. Videos are plentiful online of Carson debating atheists, upholding Adventist teaching that God created the Earth in six days, and giving personal testimonies at churches.

A twice-daily Bible reader, Carson said he still belongs to his long-time church in Spencerville, Maryland, and to another in Florida. If he's on the road campaigning on a Saturday, he and his wife will try to find a local Adventist church or watch services online.

Carson revealed he went through a brief period of questioning as a Yale University student about whether Adventism was right for him. He said he was upset by segregation in the church.

After trying out services at Roman Catholic, Methodist, Baptist, and Lutheran churches, he ended up staying.

"I concluded it was the right church, just the wrong people. The church was very segregated. You know, if you have the love of God in your heart, it seems like you wouldn't do that. That has changed fairly significantly since that time," Carson said.