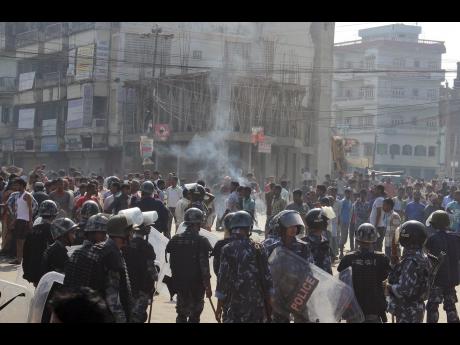 AP
Ethnic Madhesi protesters stand near smoke from a tire set on fire by them, as Nepalese policemen stand guard near the Central Development Office at Birgunj, a town on the border with India, Nepal.

A bus packed with passengers riding both inside and on its roof veered off a mountain road in northwest Nepal yesterday, killing 30 people and injuring 35 others, officials said.

Government administrator Shiv Ram Gelal said the bus drove off the road near Ramche village and rolled about 150 metres (500 feet) down a slope.

Gelal said the bus was overcrowded because of a severe fuel shortage in the country that has limited transportation.

Police were investigating the accident, which occurred about 80 kilometres (50 miles) northwest of the capital, Kathmandu.

Accidents in Nepal are generally caused by poorly maintained roads and vehicles.

The severe fuel shortage has forced people to travel on the roofs of buses, which generally is not allowed for safety reasons. It has become common to see bus roofs packed with people, and police rarely stop them.

Ethnic protesters have blocked a key border point with India since September, which has prevented the import of fuel and other supplies.