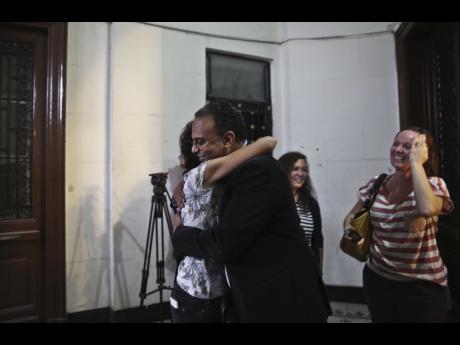 AP
Leading investigative journalist and human rights advocate, Hossam Bahgat is greeted by colleagues and friends in his office at the Egyptian Initiative for Personal Rights in Garden City, Cairo, Egypt, yesterday.

Egypt's military released a leading investigative journalist and human rights advocate yesterday who had been detained under accusations of spreading "false news," although it was unclear what charges he may face.

Hossam Bahgat, detained Sunday after being summoned to an intelligence building in Cairo, was released after signing a document saying that he would abide by the law when writing about the military, wrote Mada Masr, the news website that has published his work.

Gasser Abdel-Razeq, head of The Egyptian Initiative for Personal Rights, which Bahgat founded in 2002, said colleagues and lawyers were awaiting news from the army regarding any charges or investigation.

"We do not know now," he said. "We will ask the military prosecutor for an update tomorrow."

Bahgat is one of Egypt's best-known rights advocates, honoured with a Human Rights Watch Alison Des Forges Award in 2011.