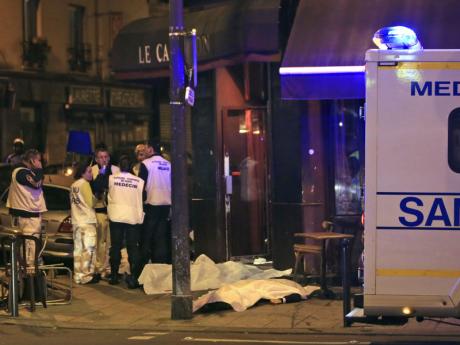 Medics attend the scene as victims lay on the pavement outside a Paris restaurant, Friday. Police officials in France on Friday report multiple terror incidents, including shootings, explosions and hostage taking, leaving many dead. (AP Photo)

At least 40 people were killed Friday in shootings and explosions around Paris, many of them in a popular concert hall where patrons were taken hostage, police and medical officials said.

A police official said 11 people were killed in a Paris restaurant in the 10th arrondissement, and others said at least twice that number died elsewhere, primarily in the Bataclan concert hall, where the hostages were taken.

It was unclear how many people were in the hall; one official said there were around 100 while another said there were far fewer.
The officials spoke on condition of anonymity because they were not authorised to be publicly named in the quickly moving investigation.

A police official confirmed one explosion in a bar near the stadium. It was not known if there were casualties.

Sirens were immediately heard, and a helicopter was circling overhead.

The officials spoke on condition of anonymity because they were not authorised to be publicly named.

The country remains on edge after January attacks on satirical newspaper Charlie Hebdo, which had caricatured the Prophet Muhammad, and a kosher grocery. The Charlie Hebdo attackers claimed links to extremists in Yemen, while the kosher market attacker claimed ties to the Islamic State group.

The country has seen several smaller-scale attacks or attempts since, including an incident on a high-speed train in August in which American travellers thwarted an attempted attack by a heavily armed man.