Hunt on for Paris Terror Suspects 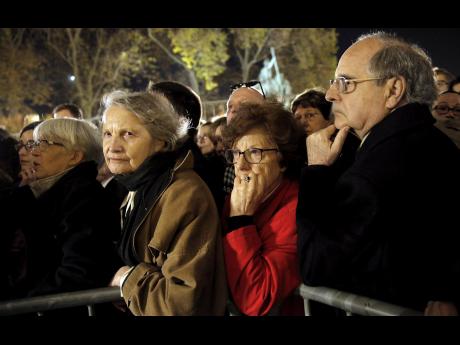 AP
People gather outside for a national service for the victims of the terror attack at Notre Dame cathedral in Paris, yesterday. Thousands of French were troops deployed around Paris yesterday and tourist sites stood shuttered in one of the most visited cities on Earth while investigators questioned the relatives of a suspected suicide bomber involved in the country's deadliest violence since World War II. (AP Photo/Christoph Ena) 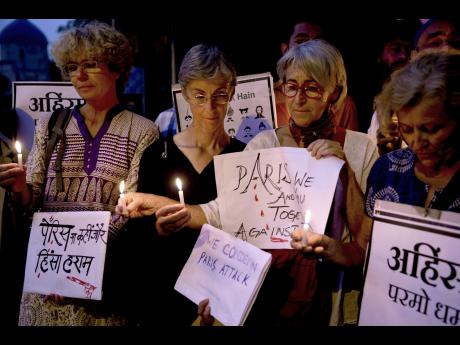 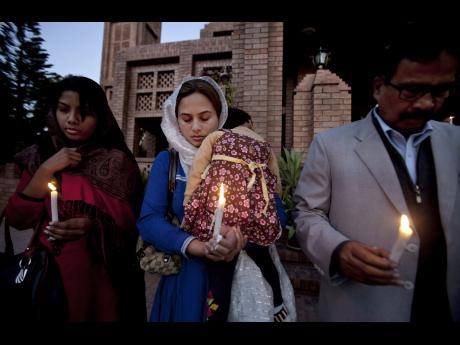 AP
Christians pray during a candlelight vigil for victims who were killed in Friday's attacks in Paris, at St. Thomas Church in Islamabad, Pakistan, yesterday. 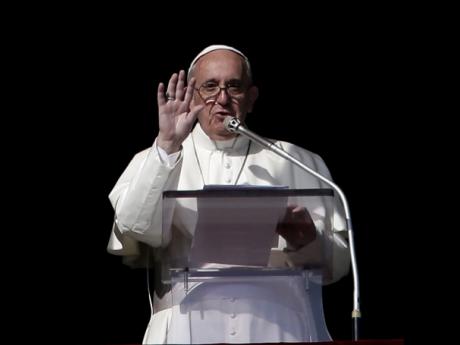 AP
Pope Francis delivers the Angelus noon prayer from his studio's window overlooking St. Peter's square at the Vatican, yesterday. He has condemned the Paris terror attacks, calling it "blasphemy" to use the name of God to justify "the road of violence and of hatred." (AP Photo/Gregorio Borgia) 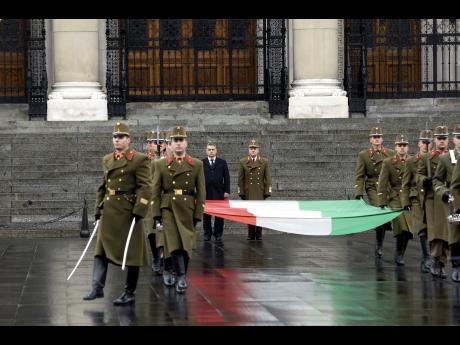 AP
Hungarian Prime Minister Viktor Orban ( left), and Chief of Staff of the Hungarian Defence Forces Colonel-general Tibor Benko look on as soldiers prepare to hoist the national flag and than lower it to half-staff on the occasion of the national day of mourning for the victims of the Paris attacks in front of the parliament building in Budapest, Hungary, yesterday. 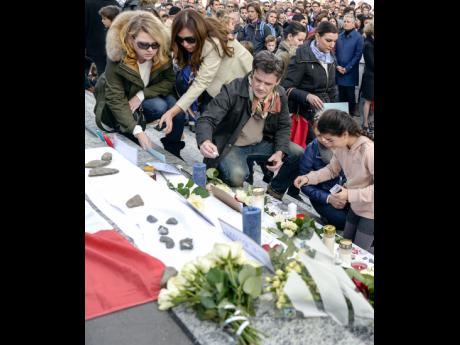 AP
People place candles and flowers for the victims of the Paris terror attacks, in front of the Opera house in Zurich, Switzerland, yesterday.
1
2
3
4
5
6

French police put out a photo of a fugitive in the Paris attacks yesterday, saying the suspect is on the run and too dangerous for anyone outside law enforcement to engage directly.

Police identified the man suspected of renting the car that delivered attackers to the Bataclan concert hall as Salah Abdeslam, a 26-year-old born in Brussels. "Do not intervene yourself," warns the message issued yesterday evening .

Abdeslam is thought to be directly involved in last Friday's attacks, which killed 129 people and wounded hundreds in the worst violence in France in decades, French security officials said.

He is one of three brothers believed to be involved in the killings; one was arrested in Belgium and another died in the attack, the first official said.

Abdeslam rented the black Volkswagen Polo used by the group of hostage-takers that left at least 89 people dead inside the Bataclan, another official said. Both spoke on condition of anonymity because the investigation is ongoing.

Seven people were detained yesterday in Belgium in connection with deadly attacks in Paris as the city entered three days of mourning for the 129 people killed in the worst violence in France in decades.

French troops were deployed by the thousands and tourist sites were shuttered in one of the most visited cities on Earth as more details of the investigation emerged.

The Islamic State group claimed responsibility for Friday's gun and bomb attacks on a stadium, a concert hall and Paris cafÈs that also wounded 350 people, 99 of them seriously.

A French police official said a suicide attacker identified by a skin sample was believed to be living in the Paris suburbs before the attacks. A Belgian official said two of the seven people wired with suicide vests were French men living in Brussels, and among those arrested was another French citizen living in the Belgian capital.

A Brussels parking ticket found inside the Volkswagen Polo parked outside the Bataclan concert hall led to one of the men arrested in Belgium, according to a French police official.

Meanwhile, the world continues to mourn in solidarity with France following the attacks. President Barack Obama yesterday called the terrorist attacks in Paris an "attack on the civilized world."

Obama, speaking at the G-20 summit in Turkey focusing on fighting terrorism, pledged US solidarity with France in the effort to hunt down the perpetrators and bring them to justice.