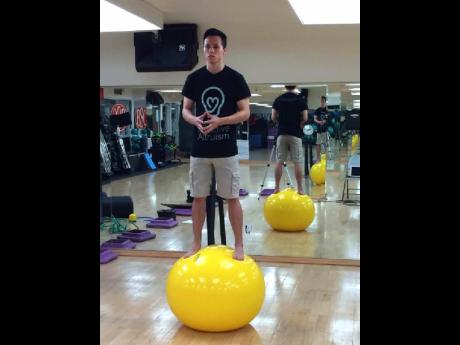 AP
Garrett Lam, who has been named as a Rhodes scholar for the 2016 academic year, standing on an exercise ball while breaking the Guinness World Record for standing on such a ball

The 32 American men and women chosen as Rhodes scholars include a member of the United States (US) National Rowing Team, an Alzheimer's disease social activist and a Harvard University student who holds a Guinness World Record for balancing on an exercise ball.

The winners announced yesterday by the Rhodes Trust were chosen from 869 applicants who were endorsed by 316 colleges and universities. The scholarships cover all expenses for two or three years of postgraduate study at England's Oxford University starting next October.

The winners include Jennifer Hebert, a member of the US National Rowing Team and University of Pennsylvania senior who is concentrating on the biological basis of behaviour, and Ericka Wheeler, a senior at Millsaps College in Mississippi who was inspired to become a doctor after watching her grandfather suffer from Alzheimer's disease.

Hebert works to help and instruct physically and cognitively disabled rowers. Wheeler has worked with Alzheimer's patients to write down their life stories, producing documents for their families.

"I'm shocked and overwhelmed right now," Wheeler said. "I couldn't believe it when they announced it. I'm still trying to process it."

The university said in a statement that Lu traveled in 2014 to Kakamega, Kenya, to help a clinic transition from paper to electronic records and conduct community outreach efforts. He decided to stay and continue his work even after contracting malaria.

Garrett Lam is studying neurobiology and philosophy at Harvard, where he is the executive editor of the Harvard Crimson. He also holds the Guinness world record for standing on an exercise ball for five hours and 25 minutes, a feat he undertook to raise money for charity.

"It's really a dream come true," Lam said of the Rhodes scholarship. "Oxford is the hub of all the things I really care about."

Lam told The Associated Press that he wants to go into criminal justice reform and change the "current punitive sentences that we have."

The American students will join an international group of scholars chosen from 16 jurisdictions around the world. A total of nearly 90 scholars are selected worldwide each year.

The scholarships are worth about $50,000 per year.