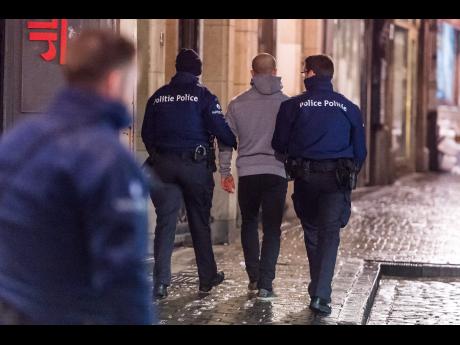 With hundreds of troops patrolling Brussels for a second day and authorities hunting one or more suspected militants, the Belgian government chose yesterday to keep the capital on the highest state of alert into the start of the workweek to prevent a Paris-style attack.

Citing a "serious and imminent" threat, Prime Minister Charles Michel announced that schools and universities in Brussels will be closed today, with the subway remaining shut down, preventing a return to normal in the city that is also home to the European Union's main institutions.

"We fear an attack like in Paris, with several individuals, perhaps in several places," Michel said after chairing a meeting of Belgium's National Security Council.

While Brussels was kept on the highest of four alert levels, the rest of the country remains on a level three alert, meaning an attack is "possible and likely."

"Nobody is pleased with such a situation. Neither are we. But we have to take our responsibility," Michel said.

The situation was tense last night in the wider area around the Grand Place, with police out in force and several raids looking for suspects going on. At one point, security forces closed off streets and yelled at people to stay away.

Western leaders stepped up the rhetoric against the Islamic State group, which has claimed responsibility for the attacks in Paris that killed 130 people and wounded hundreds more; the suicide bombings in Beirut that killed 43 people and injured more than 200; and the downing of the Russian jetliner carrying 224 people in Egypt's Sinai Peninsula. All happened within the past month.