Leaders of warming Earth meet in Paris to cut emissions 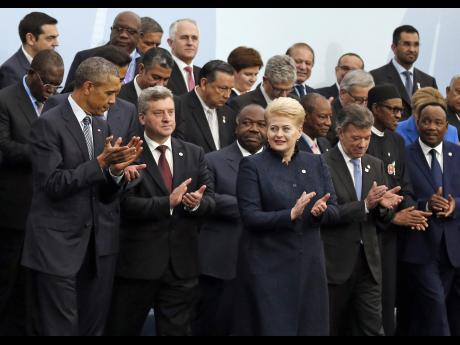 Addressing the twin threats of global warming and extremist violence, the largest group of world leaders ever to stand together kicked off two weeks of high-stakes climate talks outside Paris yesterday, stressing that by striking an ambitious deal to cut emissions they can show terrorists what countries can achieve when they are united.

"What greater rejection of those who would tear down our world than marshaling our best efforts to save it?" President Barack Obama asked his fellow world leaders.

The gathering of 151 heads of state and government comes at a sombre time for France, two weeks after militants linked to the Islamic State group killed 130 people around Paris. Fears of more attacks prompted extra-high security and a crackdown on environmental protests and threatened to eclipse longer-term concerns about rising seas and extreme weather linked to man-made global warming.

"The challenge of an international meeting has never been so great because it's the future of the planet, the future of life," French President Francois Hollande said after a moment of silence for attack victims in France, Lebanon, Iraq, Tunisia and Mali. He urged leaders to work toward a world free from both environmental destruction and extremist violence.

A climate deal is by no means guaranteed. More than 180 countries have already submitted individual national plans, but that's just a foundation for a binding agreement that Jennifer Morgan, a climate policy expert at World Resources Institute, calls "the international glue that puts them all together."

Many of the leaders called for a binding agreement and emphasised the role of private funding.